While most of the longboarding nation was buried in snow and ice, only dreaming of the spring when they could get their longboards out, Houston was balmy and the race scene was as hot as usual.  The NoBull Longboarding Team hosted its first “Battle For Peace” race. The race format was typical full contact Texas fashion, with a long distance push(LDP) race of 7 miles in the afternoon along Houston’s Bayou near downtown, followed by an outlaw garage race at midnight. The event brought out Texas’ finest in both disciplines and Team NoBull set another garage race attendance record of 99 racers at an outlaw garage race.

Houston happens to be home of one of Longboarding For Peace’s most active and successful chapters led by Mikey Seibert, Neal Roberts and Richard Supernaw. Every Friday and Saturday these guys teach a couple of dozen kids self-esteem through the sport of longboarding. Texas’ stoke and support for the longboarding scene through racing, huge garage sessions, downhills, and slide-jams, is reaching legendary status. We are excited to see the next wave of talent which will come out of the Grom Army that is Longboarding For Peace Houston.

The LDP race was Houston’s first “pushing wood” race and was won by Kaspar Heinrici, a legend in the LDP discipline race, followed by Clayton Nalley, and third place was captured by Dave Angelus.

The garage race was a nasty, full- contact, high speed adventure. The Open class was won by Joey Specht, followed by Clayton Nalley, and Bobby Waldron. The top three were all members of Team NoBull. Clayton Nalley won the title of Triple “D” which was the Dual Duel Discipline Award for the best overall finish in both races. 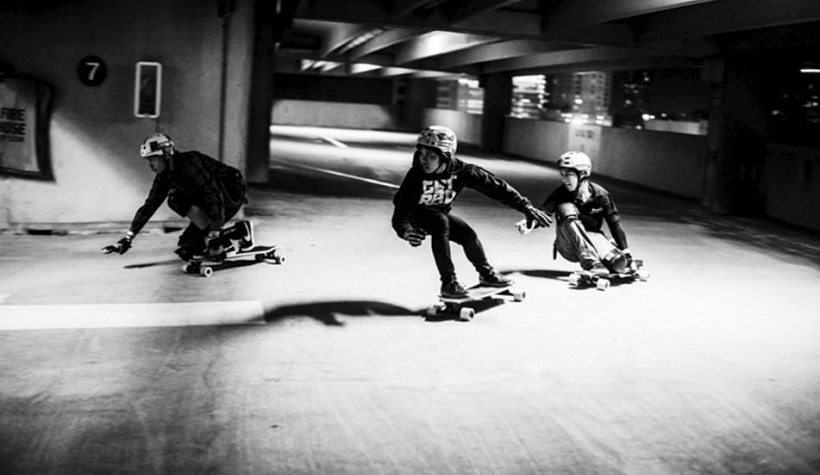 The women’s title was captured by Kris Haro. Erika DiLalla came in a close second and Taylor Jandl took third. Taylor is a new shredder on the race scene and this was her first podium spot! by Greg Noble