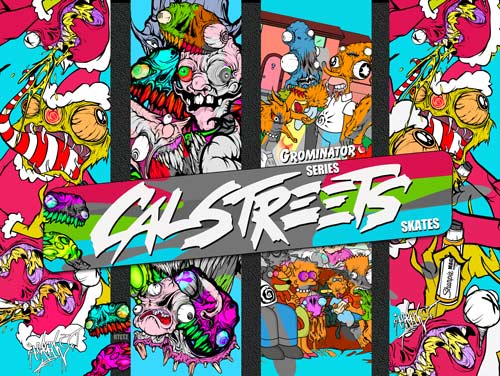 Grominator has been a huge aspect of Rayne longboards designs! His work is featured on the Rayne double kick boards which are a part of the slide series. In total, Grominator has produced three outstanding boxcar graphics for these boards!

Grominator is a street artist, that is making a rise within industry. With Rayne furthermore asking him to design the graphic that will be featured on their boards, thus indicating his talent. We personally reached out to the Grominator personally and opened our store location, as a home for his beautiful masterpieces. With the beautiful creations of the Grominator, we are proud to acknowledge the bond between local people and companies.

Rayne Longboards as been our best friend since our opening days and we are greatly honored with everything they have provided for us, as well as the community itself. they have been at the top since day one and they certainly have a reason to be.

That being said, we are greatly appreciative of the generous gesture by Marin and Rayne Longboards. They have just recently provided us with one of the three Rayne Grominator Boxcars!

You heard that right, there’s only 3 of these beautiful creations. Rayne had Grominator design the graphic that will therefore be featured for their double kick tail boards.

Rayne History Of the Boxcar:

To celebrate the beautiful graphics of their double kick series, Rayne and the Grominator came together to produce his artwork on a few miniature Boxcars. Once these were created Rayne then took them down to the tracks and set them up. This was to simulate the boxcars portraying true life sized ones. In addition, photographs were taken from low angles to truly capture the allusion of these being actual boxcars on the tracks of Vancouver.