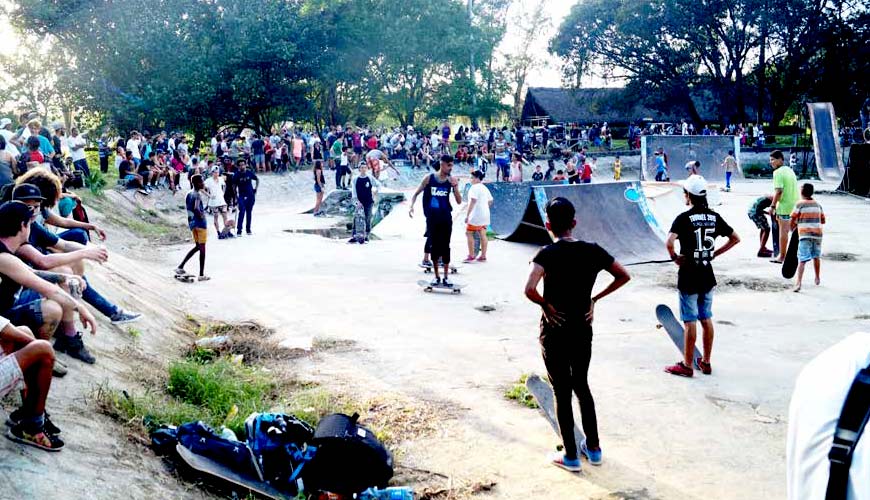 The story of “Cuban Linx,” aka the “Juergen Gritzner transportation project,” began in the summer of 2015. Ian Comishin and Kalie Racine of Kebbek Skateboards, encouraged by the historical political changes in Cuba, had the idea of bringing 100 completes of my Alps board to Cuba to support and energize skaters there

Cuban kids love to skate, but it’s often been difficult for them to get equipment. Many use the boards and shoes that friendly travelers leave behind. Several skate crews around Havana care for the community by supplying their fellow skaters with gear whenever they can, and U.S.-based crews like Amigo Skate and Cuba Skate have also done a lot to ensure Cuban skaters are rolling. But we all wanted to do more.

Even though we were planning on giving the boards away for free, it still took a lotof planning and negotiating to make it happen. The biggest challenge we faced was trying to get permission from the Cuban government to legally bring that many boards. No skate company had ever shipped that many boards to Cuba.

On Jan. 3, 2016, a group of us finally landed in Cuba. Our crew consisted of Kalie Racine from Kebbek (team rider and project organizer), Soren Johnstone from Vancouver (the magic man behind the lens) and me, Jürgen Gritzner from Graz, Austria.

During our time in Cuba we met many skaters, including Yojani Perez and Carlos “Charley” Emmanuel. They were a combination of crazy and relaxed. Above all, the energy level was remarkable.

After arriving in Cuba on a solid 73-degree Cuban winter day, we met up with “Skateboards for Hope” founder Betty Esperanza, Andréa Sévigny (of Montreal’s Les Vagabonnes) and Justin Darrow (First Nations ambassador) to skate the city for a bit. We were blown away by all the new impressions we saw just cruising around Old Havana. The central core of the city has so many colors, and there is so much life on the street. It’s hectic, but with a relaxed vibein the background. It was just amazing to feel that mixture. 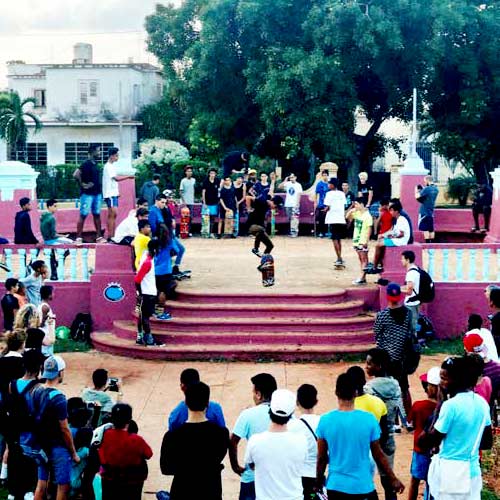 After that we went to a “slide jam” we’d heard about and brought a couple of longboards to give away. When we arrived, however, we soon found out that “slide jam” in Cuba meant something totally different than we’d expected – in this case, a street skate contest with two flat rails and a stair set. It was called a slide jam because when you jump on a rail you most likely SLIDE on it.

At first, it felt strange to bring longboards to a street skate contest. But as soon as I started skating with the locals I found out that every kid who was street skating also had a longboard at home or just loved longboarding as well. This was so awesome for me to see – a big family of skaters no matter what board you ride! I have always dreamt about this kind of atmosphere, and here in Cuba it does exist.

After we gave away some boards, shirts and stickers I joined the second part of the contest. It was a five-stair set with a short run-up and a gnarly landing with cracks everywhere.

The next day we met up at El Cristo for some practice runs for the upcoming race on Sunday. The road we were supposed to skate was next to the house Che Guevara used to live in and was definitely one of the sketchier roads there. It had bad pavement with lots of cracks and holes, but we wanted to ride. Unfortunately, it was pouring rain so hard that we had to wait for an hour before it finally cleared up a little and skaters started to show up.

That session was fun, and it felt more like surfing than downhill skating. Everything was so soaking wet that we had to leave after two hours of skating. We also met some guys from Amigo Skate who told us about a contest at the only skatepark in Cuba.

We decided to get to the contest early to get familiar with everything and help clean up the skatepark. There were mud spots everywhere, but brooms, sun and motivation helped get it cleaned up. The atmosphere at the contest was a pleasure. Everybody showed up!

Street skaters, longboarders, BMX guys, graffiti artists, inline skaters, here and there a scooter rider; it was all one big family. The skating in the contest was equally inspiring. We saw some crazy maneuvers, half of which were performed on some very beaten-up equipment.

The day after the park contest, the downhill race took place on El Cristo. Again, shortly after we arrived, the weather switched to rain. Nevertheless, many people showed up, and all of them were so hyped to ride or watch the race that there was no turning back anymore. The race had to happen, so everybody was cool with riding in the rain.

In its own way, the race was as wild as the previous day’s park contest. 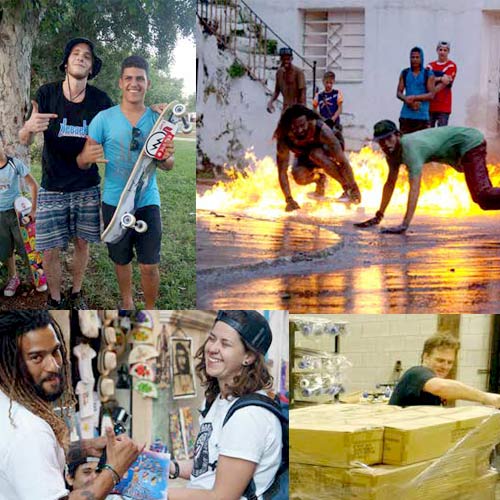 Besides the rain and the holes and cracks in the pavement, there were pieces of glass on the road in some places, and we could never be really sure whether traffic at the finish line had been blocked. So riders in the semifinals actually had to avoid a bus coming up the hill on the straight section. I think it was the sketchiest race I ever had the pleasure to compete in.

Still, the race was run and winners were declared, and Kalie and I had the honor to serve the champagne to the lucky ones on the podium. It was amazing to have been part of that. I felt blessed. My pro model served as first prize, along with a helmet, slide gloves, T-shirt and more. So much stuff was collected to give away by different people, especially for this race. There were many smiling faces that afternoon.

The next few days after the race it rained quite a bit, but we kept busy by doing interviews, meeting people and filming little bits of skateboarding around town whenever it cleared up for a few hours.

It was a crazy two weeks that we lived through. There were intense ups and downs. For example, kids were waiting for us at the hotel lobby almost every night because they were so stoked. We had a number of what felt like neverending searches for ATMs that would work. There were many special moments skating with the locals in the rain. We had a blast jumping off the ferry from El Cristo Island to Old Havana with Kalie and “Charley Brown,” and driving around in those American classic cars. Our final memory of trip was a skate session with our favorite locals. In such a short time it really felt like we had become part of a family.

A quiet revolution is happening in the streets of Havana, and it’s not what you think.

The longboarding scene has become the “sport du jour,” next to street skateboarding and surfing. Longboards are now sharing the crowded streets with other types of skateboards, bicycles loaded with coconuts, vintage American cars from the 1950s and Russian Lada cars, remnants of the Cold War. The U.S. commercial, economic and financial embargo is still omnipresent, and although relations between the U.S. and Cuba have been improving of late, the changes are not as evident on the dinner plates of Cubans, and it certainly hasn’t changed anything for skateboarders who depend on donations of equipment to practice their favorite sport.

Two longboarders, Carlos “Charly” Manuel and Belkis Lupez Correa, recently joined the Longboarding for Peace mission. (Please like the Facebook page!) With blood, sweat and tears, they meet up regularly at the famous El Cristo with little or no protection. Their homemade gloves are made of flattened beer cans or squished water bottles loosely strapped onto a gardener’s glove – taking recycling to a whole new level!

El Cristo is a must-see tourist attraction. You can hop on a packed bus to get up the steep, winding road to the top. But if you want to skate back down, say a prayer before you push off (whether you are a believer to not), because your braking skills will be put to the test, and deep pendys are not an option in twoway traffic. 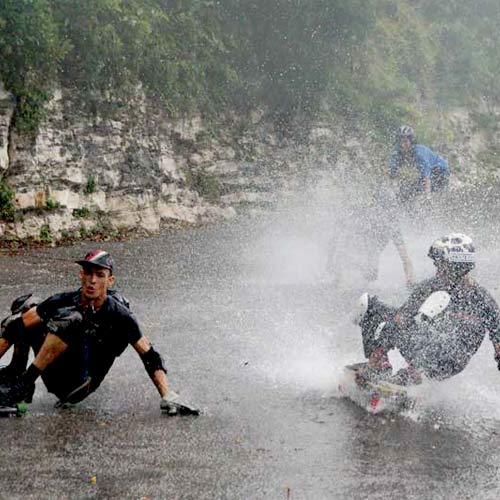 Carlos Manuel has a dream to develop the Cuban longboarding scene at an international level. When I asked him why he felt the desire to become copresident of Longboarding for Peace Cuba, he said, “I believe we can educate everyone to learn and understand more about how longboarding can create harmony and balance in the life of youth. We can demonstrate freedom and peace by uniting everyone through sports. It’s why Longboarding for Peace resonates with my values. It’s a no-brainer.”

The other co-president, Belkis represents the strong feminine insurgence of longboarders who are competing alongside their fellow male counterparts. At only 5 feet 3 inches, she bombs down hills fearlessly, eclipsing some of her 6-foot-tall male teammates with ease. “I really hope to inspire more girls to longboard,” she says. “It’s predominantly male, but I believe girls can succeed in marking their territory on the streets in Havana.”

The local recreation and educational programs have come a long way too. While the rest of the developed world is implementing transportation regulations and skateparks, Cuba is still lagging behind with social stigma. However, the popularity of the sport is creating a need for municipalities to develop recreational status so that skateboarding is deemed legal. Now that’s good news for everyone.

For skateboarders, it’s a sigh of relief to be able to practice out in the open.

However, it’s a long way from being fully recognized and funded. That’s why donations of equipment and infrastructure are so vital in Cuba. So on your next vacation, pack up extra gear, make new friendships, and know that your contribution will bring peace and harmony to the future of Cuban youth. And don’t forget to carve your passion into the streets of Havana! 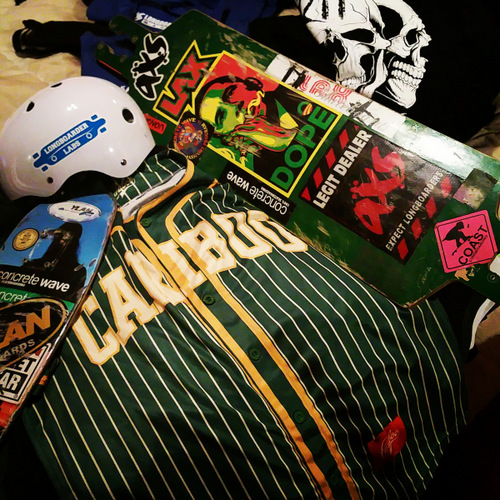