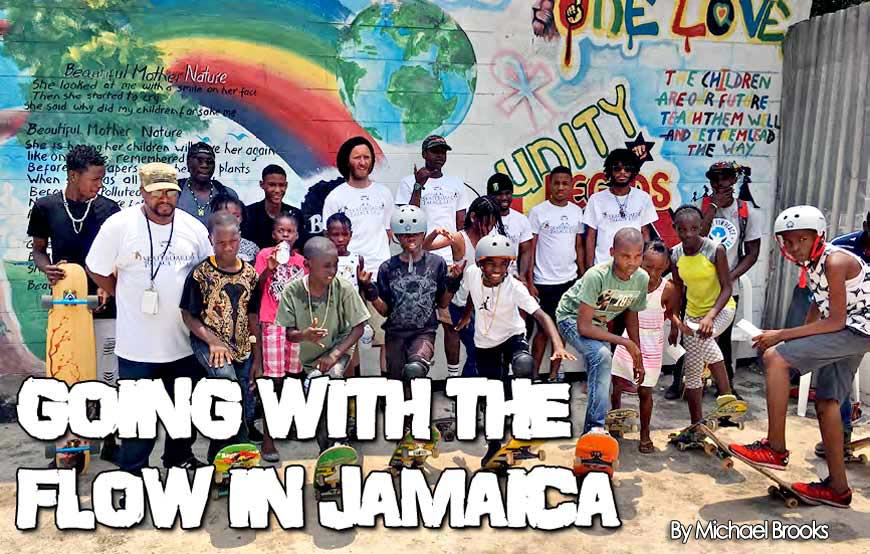 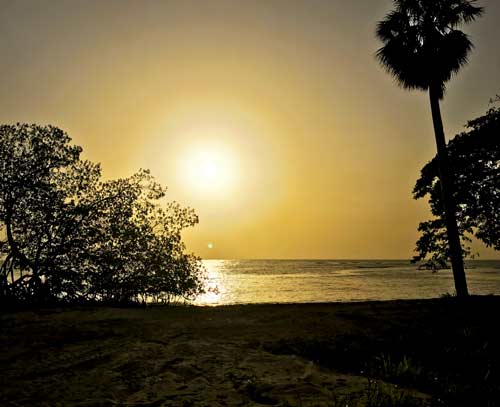 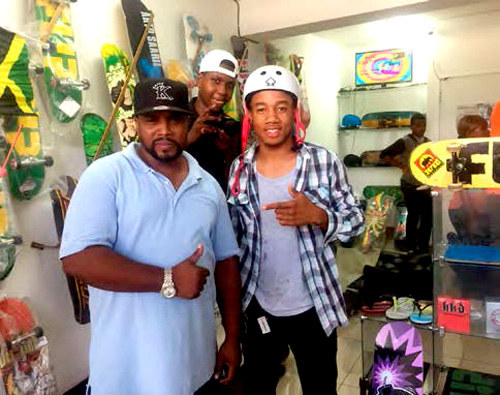 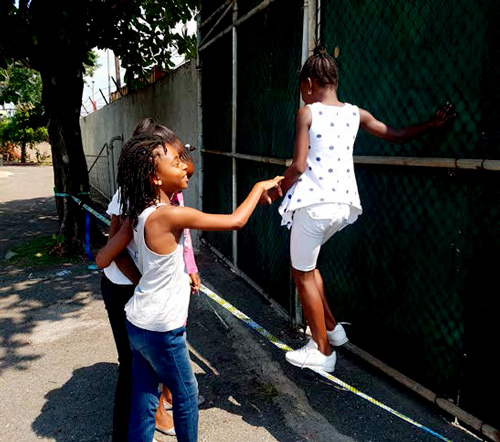 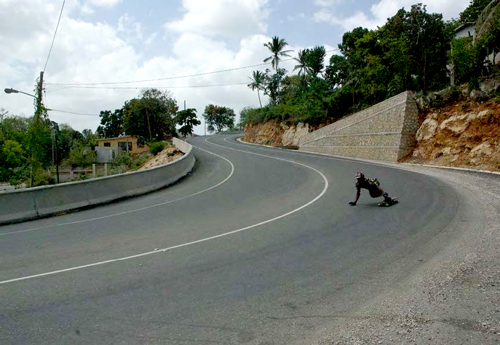 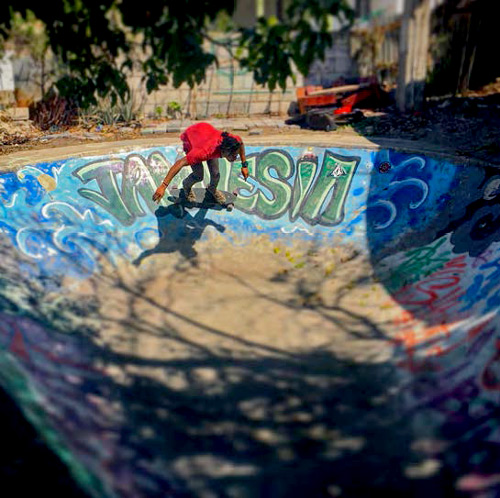 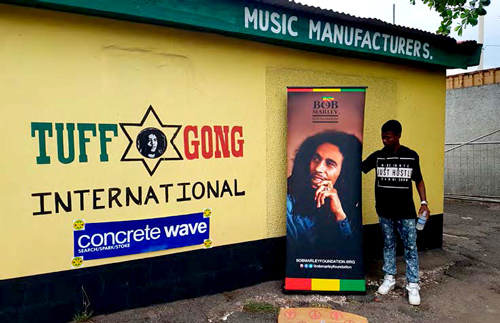 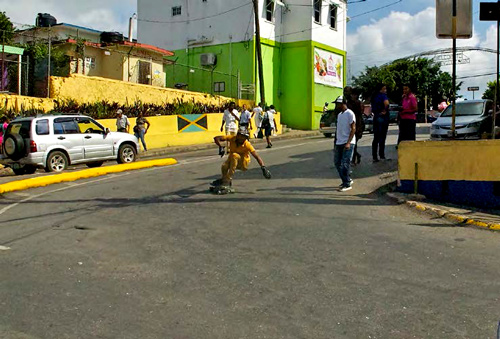 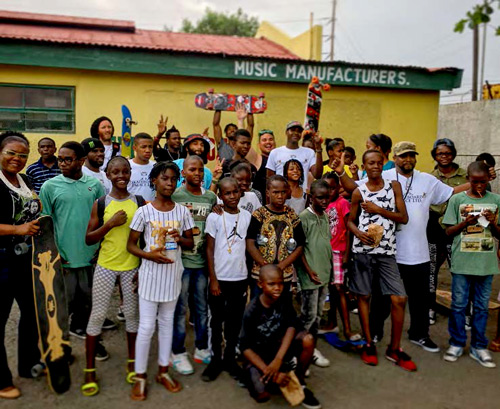 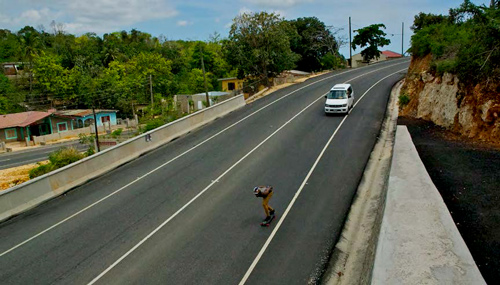 Skateboarding is not the first thing you think of when you think about Jamaica. But rest assured, there is indeed a Jamaican skate scene, and the opportunities are endless on this tropical island. For most visitors, the beaches of Ocho Rios or Montego Bay are their primary Jamaican experience. Some guests, if they defy the management of the hotel, venture off the property and experience another side of Jamaica. For many years I have been waiting for the right moment to visit Jamaica. I was not really interested in an all-inclusive resort – I wanted a taste of the real Jamaica. Fortunately, through a set of wonderful circumstances, I found myself in Jamaica at the right time and with the right people.

The genesis of the trip begins in November of last year when Luis Bustamante (of Bombora Boards and ZF Bolts fame) visited my house. I had posted about my sale of skate collectibles, and Luis showed up ready to make a deal. While we had known each other fairly well, this visit seemed to bring our friendship to another level.

I loaded Luis up with a large number of items and worried if he would have the space in his apartment. I needn’t have worried. Turns out Luis is a master of space conservation and now oversees the CW archives. Over the course of several weeks, our conversation drifted to a potential trip to Jamaica. One of Bombora’s pro riders, Brady Brown, is a transplanted Jamaican, whom I had seen a number of years ago tearing things up at Toronto’s infamous “Poop Chute.” As things started to come together, the beginning of April seemed like the perfect time to book a flight to Kingston, and that is precisely what we did. Brady’s family still lives in Jamaica, and his father, Herschel, is the councilor for Chapleton in the parish of Clarendon. Clarendon is in the center of Jamaica, about 70 minutes or so from Kingston. It is surrounded by lush green mountains and is absolutely a magical place. Our flights booked, I contacted “Jungle” Jim Kuiack (our international man of mystery here at CW), who suggested that I contact Lance-O of Kulcha Shok Muzik. I’ve known Lance for a number of years, and Jim said he would have some good contacts in Jamaica. Turns out Jim was right. Lance suggested that I contact the folks at Jamnesia, a great surf camp just 15 minutes away from the Kingston airport. I contacted Jamnesia’s owners, the Wilmot family, and explained that I was coming to Jamaica and wanted to do a skate workshop for the locals. Adding to this Jamaica connection, when I was in Munich at the ISPO trade show in February, I met up with Dennis Telfer, one of the founders of Sector 9. Pointing to a Bob Marley longboard, I asked Dennis if he knew anyone who worked with the brand. Turns out he did, and I began to exchange emails with Alicia Williams of the Bob Marley Foundation. I explained that I wanted to bring Longboarding for Peace to Jamaica, and Alicia set about making things happen at Tuff Gong, the famous recording studio where Marley created his musical masterpieces. The final piece of the puzzle came when I happened to mention on a Facebook post that I was looking for local contacts in Jamaica. A man by the name of Steve Douglas emailed me and said he was owner of Jamaica’s first skate shop – Skateboard Palace.

Our four-hour flight was free of any hiccups, and soon Luis, Brady and I found ourselves in 80-degree-plus heat. Brady’s father met us at the airport with a welcoming smile and we quickly headed out to Jamnesia. Jamnesia is located in Bull Bay, where Bob Marley used to run on the beach. A few years ago, Jamnesia built a concrete bowl. It’s very tight, but a great deal of fun. The vibe at Jamnesia is very cool. Managing Director Imani Wilmot made us feel so welcome. About half a dozen kids, ranging from 18 months to 8 years of age, enjoyed the balance boards and magic tricks. Most of the children were in water before they could walk, and displayed incredible balance. As the adults looked on with smiles, I realized that our trip could not have started any better. A few hours later we departed for Chapleton. First we took one of the new toll highways that have made getting around Jamaica much easier.

After about 40 minutes, however, we veered off the highway and onto the local roads, and here I began to understand the roots of Brady’s skill as a downhill skater. The roads are tight and winding, and everyone seems like they are in a hurry. It’s one part exhilaration mixed with two parts controlled chaos. As Brady would remind me on numerous occasions, “It’s about driving appropriately.” As we ventured closer to our home for the week, we were excited to see fresh asphalt was being laid throughout the parish. Again, I thought “What an incredibly good omen!” We stopped in Maypen (the closest larger town to Chapleton) to pick up some Kentucky Fried Chicken. Believe it or not, KFC in Jamaica is somewhat different than its North American counterpart. It seems tastier and less greasy. Apparently, KFC use Jamaican-raised chickens. As we took in the incredible views from Brady’s home, everyone agreed that it was a perfect way to end our first evening. If you’ve ever visited an island, you’re sure to come across the expression “island time.” The intense pace of Toronto and sense of urgency that seems to envelop my day-to-day existence simply washed away in Jamaica.

I woke up early on my first full day in Clarendon to watch the sunrise. It was an unforgettable moment. Luis put his culinary skills to the test and rustled up a fresh breakfast. Our appetites satiated, we headed into town to explore. It was here that we met up with a gentleman named Ralston. Ralston was almost like family to Brady. As a schoolboy, Brady was dutifully brought home from Clarendon College by Ralston each day. Throughout Jamaica you will find all kinds of patties (a pastry that contains various fillings inside a flaky shell), but the three of us fell in love with Juici Patties. It’s a very successful chain, and it got its start in Clarendon.

We visited numerous times. But don’t just try the patties, try the loaf as well. While we were not successful in finding a skatepark, we did find a roller rink in Maypen. As each day collapsed joyfully into the next, we took on the familiar pace of island time. When the car we had rented from a neighbor lost a hubcap, a five-hour adventure then ensued, the details of which I can barely remember. I know that we checked out a number of places and that Brady saved the day on at least one occasion.

Throughout our week in Jamaica, we kept on talking about roots and what it means to return home. When Brady skated in his freshly paved hometown, the locals went absolutely wild. They were thrilled to see him and marveled at his skills. One local kid in particular was so taken with Brady that he offered to carry Brady’s board. Soon enough, this kid was a freshly minted skater and had a cadre following him throughout the streets.

As many of you know, Concrete Wave is a huge supporter of the Shralpers Union, the surf/skate/snow collective founded by Noel Korman (RIP) and known for its philosophy of “high fives and positive vibes.” There is no doubt that I felt Noel’s presence throughout the trip. The smiles and positive energy were everywhere. As the roads of Clarendon Parish became increasingly filled with smooth asphalt, we set out the next day with Ralston to capture Brady bombing a particularly sweet hill. As Luis perched out the van, I positioned myself in a perfect spot. In what is perhaps one of my most cherished memories of the entire trip, I gazed up at a bus full of children who had just witnessed Brady take on the hill. They were beaming from ear to ear, truly in awe. “I think that this will probably get the word out,” Brady remarked to me. It was truly an epic moment. The fuse had been lit. We had a chance to visit Clarendon College, which Brady had attended as a student. He was welcomed with open arms. As Luis handed out stickers, the kids were proud to be a part of Brady’s homecoming. Three days into the trip, we attempted to capture the intensity of riding Maypen. As Luis pointed out, it sure felt like the old days. A number of curious onlookers weren’t quite sure what we were up to. It’s not every day that you see skaters and photographers barging the streets of Jamaica. But true to form, everything worked out fine. The session ended with (as you can probably imagine) another fine feast at Juici Patties. As we explored Clarendon, we had a chance to meet locals and get a sense of the island vibe. If you do get a chance to visit Jamaica, make sure you contact a local or two. They will show you a whole other side that I assure you will leave a deep impression on your soul.

If Jamaica only had stunning sunrises and sunsets, that would be enough. But it turns out the land is incredible fertile. Fruits and vegetables are plentiful, and the flowers are truly beautiful. Enjoying mangoes and coconuts directly from the source makes you understand the real meaning of roots. Of course, the big day was the trip to do the Longboarding for Peace workshop at the Marley Foundation. We arrived early to set up. Thanks to the generosity of Gibbon Slacklines, we were able to expand the balance program. The kids took to the balance boards and skateboards quickly and the slackline was a huge hit. The Marley Foundation invited a few additional groups to join in the fun. This included Fight for Peace, a nonprofit that uses boxing and martial arts as a way to teach young people how to realize their potential. What was planned as a one-hour session quickly spiraled into two-and a-half. The kids were coached by the team from Skateboard Palace, and I am especially grateful for their hard work and dedication. As the session wrapped up, I could see that our workshop had been a tremendous success. Riding through the grounds, Luis turned to me and said, “Could you ever imagine you’d be riding through Tuff Gong Studios on a skateboard?” I thought to myself, “When it comes to Jamaica, anything is possible!” We headed back to Jamnesia to spend one final night on the island. The mellow vibe was the perfect place to unwind. In the evening, I met up with a Japanese Rastaman and enjoyed some fantastic live music all the way until 2:00 in the morning. The next day I planted the seeds about doing LFP workshops in Kingston. As we headed to the airport for an early-afternoon departure, I began to think about how long it would take for me to return to Jamaica. Plans are already under way to build a pumptrack in Clarendon, and I can definitely see Jamaica competing on a global level. 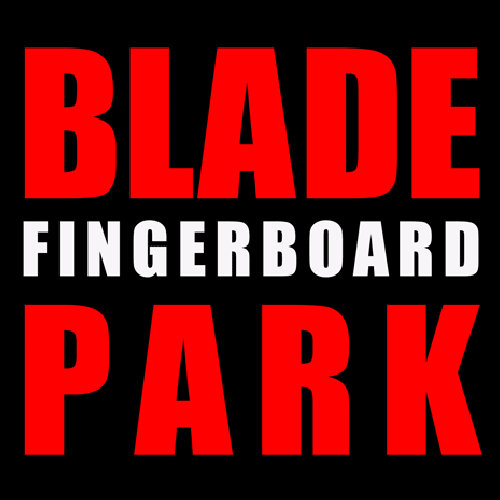