Skaters Over 50: Back in late 2013 I found myself wondering how many other skaters were around my age and still skateboarding. I was a member of several online skate bulletin boards like Skull & Bones, Bulldog Skates and Silverfish Longboarding, and as much as I enjoyed them, I thought something was missing: a place exclusively for skaters from the ’60s, ’70s and 80s, all on a site that would be easily accessible from mobile devices. Facebook seemed to be the answer.

So I started “ Skaters Over 50” as a Facebook group. I had one or two friends around my age that skated, and a handful of people I friended on Facebook were old-timers too. There were already a bunch of skate groups on Facebook, but none fit the criteria I envisioned:a love for old-school skating, in an environment where mutual respect for other members was one of the only rules.

The group started off slowly, but after growing to a couple hundred members, I realized I’d need some help. I had a few offers, but I chose my Facebook friend Eddie Katz. Eddie was a pro skater on the Logan Earth Ski team back in the 1970s, and he brought a needed balance to the group; I was just a mediocre skater even in my best days, and Eddie was a seasoned pro. I was the kid that read every issue of SkateBoarder magazine, and Eddie was one of the guys in the magazines. We wanted to make the group accessible for everyone our age: people who wanted to reminisce about the good old days; collectors; people who were still out there shredding all these years; and my favorite, guys (and gals) who were picking up a board again for the first time in decades. We also started a second group for members to buy/sell/ trade skate gear as well. 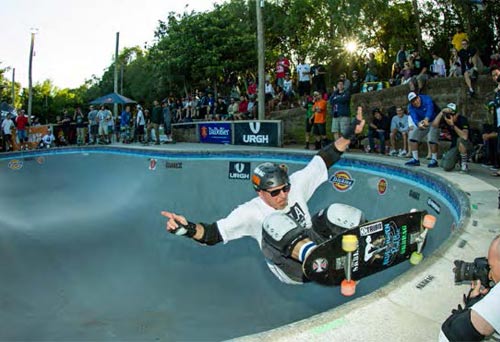 If you’re old enough to remember SkateBoarder from the 1970s, you know how it was THE focal point for skateboarding in that era. That’s what we’ve strived to be for our generation in the Internet age. And now, thanks to this column, we’ve expanded our reach a bit further (believe it or not, not everyone from my generation is on Facebook). I’m looking forward to bringing readers of this great magazine into our world, as well as introducing Concrete Wave to the few members of our group who haven’t already read it.

I hope this has served as a good introduction as to what we’re all about. Check us out at www.skatersover50.com You don’t have to be a half-century old to join, but if you’ve been skating for a couple
of decades, that’s close enough. I hope to
see new faces soon. Thanks to Michael Brooke and Concrete Wave Magazine!
By David Lober