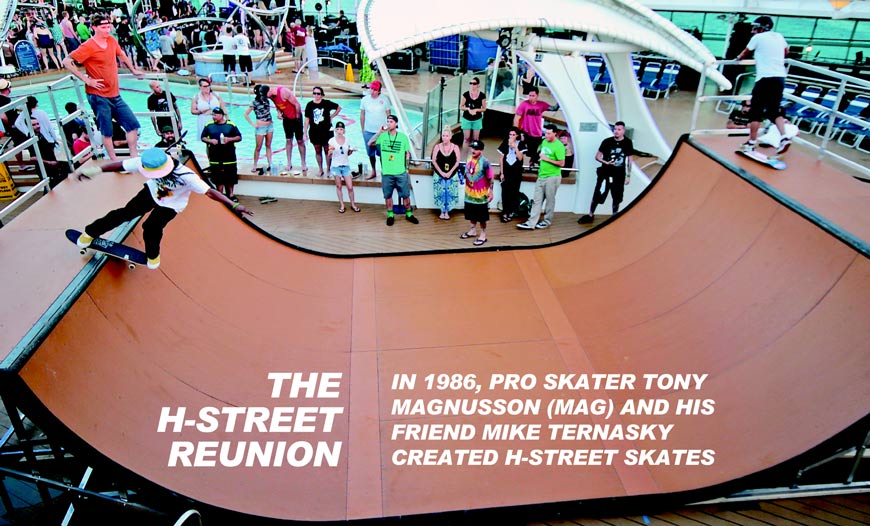 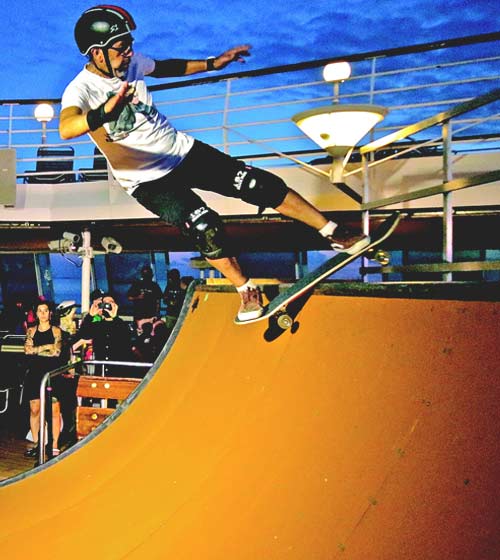 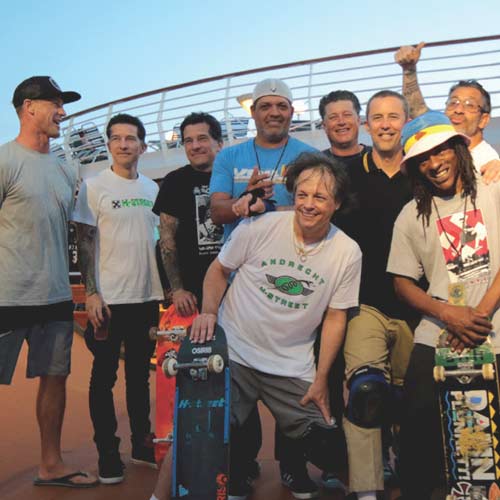 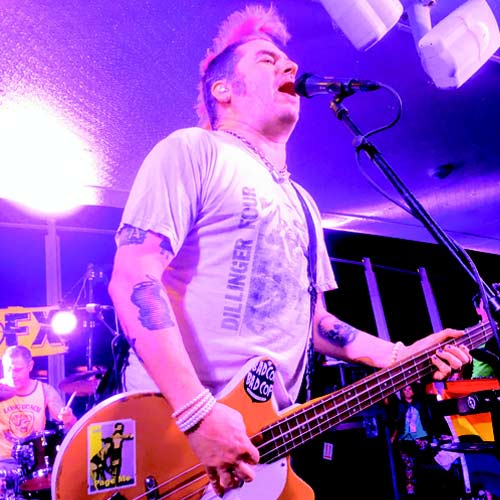 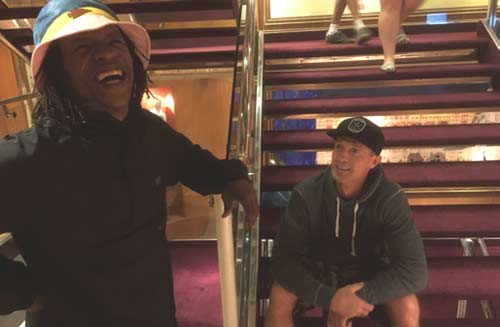 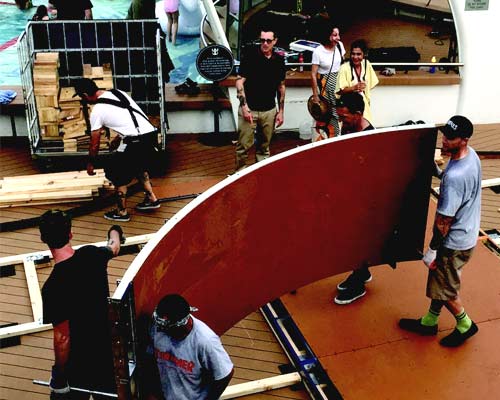 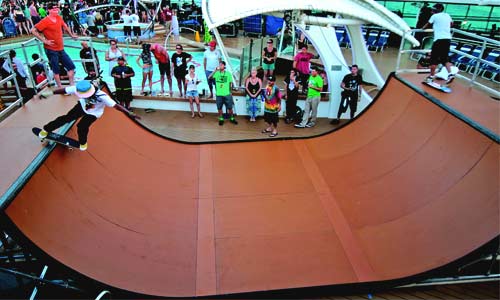 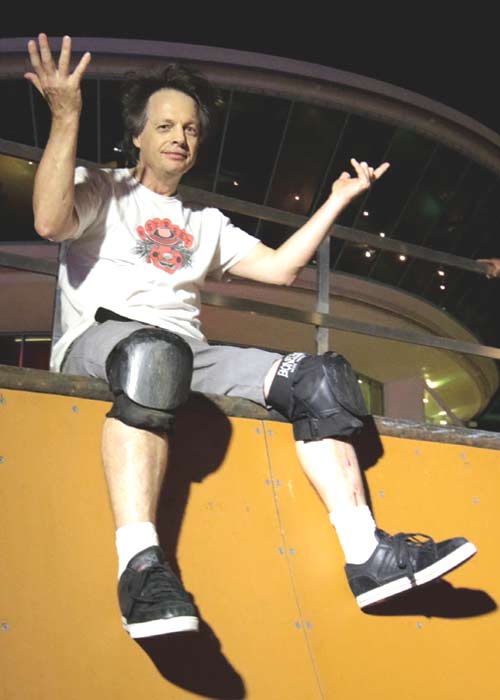 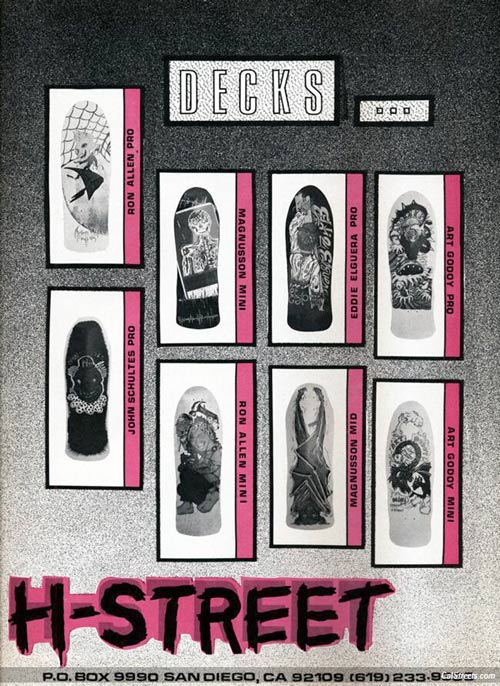 THE H-STREET REUNION by Chad Thomas

From March 10–13, 2017, something magical went down in the Bahamas –
something that hadn’t happened in nearly 30 years: The original H-Street
skate crew got together in the same place at the same time. It was the skate
equivalent of the legendary band the Eagles reuniting – as if hell froze over.

Let’s back up a moment for the readers who weren’t old enough to have
experienced what this iconic group created for the rest of the skating world.

Mike and  Tony built what would become one of the most respected, stylish and progressive teams skateboarding has ever seen. With riders like Magnusson, Matt Hensley, Ron Allen, John Schultes, Art Godoy and Eddie “El Gato” Elguera, as well as a 14- year-old Danny Way, the team was so stacked it became known as “The Magnificent 7. During those early years, Tony and Mike began experimenting with filming and editing videos. But because they didn’t have the budget of huge companies like Powell-Peralta or Vision, they did things themselves. From this act of DIY ingenuity and creativity (which Tony fully credits Mike for thinking of and inspiring), a new style of video was born – a style that is still emulated today. Pick a skate video, any video, and you’ll see the H-Street signature follow-cam/rider’s-eye approach pioneered by this group.

Sadly, on May 17, 1994, Tony’s friend and co-conspirator Mike Ternasky was killed in an auto accident when an elderly woman failed to stop at a stop sign. He was only 28 years old.

Mike’s sudden death had a heavy impact on the riders, who considered him a friend and a mentor. When I asked Matt Hensley to talk about Mike T., he simply said, “There wouldn’t have been a ‘team’ if it wasn’t for him. He was always motivating, always around to talk, inspire, give rides – whatever we needed, he took care of us.” Mike’s passing also effectively brought an end to H-Street as a company. Without his presence to hold things together, the riders all eventually went their separate ways.

A first-of-its-kind halfpipe was built aboard a cruise ship – while at sea!

But in March 2017, Hensley and Mag wrangled this elusive group of nomads into a mid-Atlantic adventure. The team agreed that they were all in, as were notable H-Street alumni Sal Barbier and Steve Ortega. The reunion on the high seas was a go!

With the help of Skatepark of Tampa, a first-of-its-kind halfpipe was built aboard a cruise ship – while at sea! It created a unique scenario for this legendary crew to rip, ride and slash while catching up and listening to live music from bands like Flogging Molly (for whom Hensley plays accordion), NOFX, English Beat and The Fuckin Godoys – to name just a few.

Ron: Going through Norway and driving through the fjords! Spent a lot of time in Europe. Plus traveling around America with Matt. It was a blast!

Eddie: Traveling with the team was always fun. I remember doing the El Gato Summer Tour over 13 weeks in a motor home with me, Dawna [Eddie’s wife] and two of my kids (that were toddlers). We started off with Danny and Alf [Alfonzo Rawls] when they were still ams. Then we traded off with Brian Lotti and Mike Carroll, then Anthony Vincent, I believe, and Chad Minton. Great memories to see where everyone is at in life now.

Steve O.: H-Street Tour Midwest doing tricks no one had seen or done before.

Art: The whole heyday was a fond memory. From the start: Schultes’ mom finds us a duplex with kidney pool in backyard; skating Andy’s ramp; plane tickets, contests, demos; doing graphics and watching ’em come to life from paper to film positives to Rubylith to silkscreens to boards, shirts, stickers … Living in Cardiff: surf in the morning, McGill’s park in the afternoon, surf glass, then chicks at night. Cruising in our Monte Carlo, tattooing friends, gangsters – whoever wanted work. The whole time was super creative. The best part was that if we had an idea, we’d tell Mike and Tony and it would come to life. There was always something happening. The support and backup we had with our ideas and having them channeled into the company and allocated to areas where they’d explode into something real.

Ron: I fired the first filmer cuz he wanted to do follow shots in a wheelchair. He couldn’t keep up.

Eddie: For me it was just like another session; just skating and having fun.

Who inspired and drove you (from the team)? Tell us about the most memorable feat you witnessed.

Ron: When on tour with Hensley, s—’s gonna go down. We drove hella long, like 16 hours, and Matt just kept saying he was thinking about a trick. Right when we get to wherever it was, he jumps out of the car, shoes untied, in a bomber jacket, grabs his board and skates hella fast at a bank with a quarterpipe. He does a tre flip tailgrab first try – after a 16-hour drive! Then he says, “I was thinking about that the whole drive.”

Eddie: I was always inspired by Danny for vert and Matt for street. Me and T-Mag would always push each other whenever we skated – friendly competition.

Steve O.: Ron, first guy I ever saw ollie up a full-size picnic table – whoa! And Eddie, he has so many tricks in the bag it would be a disservice to mention a specific trick. That would limit him.

Art: I don’t know if there was one specific person that inspired me from the team. I think the whole team in general was an inspiration. Not everyone was “known” – not household names – yet look what they done! Everyone was inspired and fueled by what was happening with the company. Everyone felt like their contribution was valued, and you could really feel it in the way things evolved. We were all like gears in a car. It wouldn’t function the same with any missing gears. That was the inspiration.

What did it mean to spend three days with your H-Street brothers in the Bahamas after all these years?

Ron: It was awesome to see all those guys! Especially Schultes; I don’t remember him being so funny! He had me busting up! Great guy. Plus, really got to hang and drink with Ortega. That was epic!

Spent late night talking with Sal and [Marc] Hostetter. They blew my mind. Plus all that music! Also, the homies of Skatepark of Tampa coming and building the ramp aboard the ship; hanging out with those guys was epic as well. It was great to see all of them.

Eddie: It was the best! Skating on a mini ramp on a cruise ship was epic, bucket list material.

Steve O.: Indescribable. Three days with friends that had a huge influence in shaping one’s character.

Art: It was unreal. So much time had passed so quickly that until that night it was hard to stop and realize what we had all accomplished as a whole. The changes that really made skateboarding what it is today. Some of us became obsolete, but in the end sometimes there are sacrifices for the greater good. It was a great night. Seeing everyone there was really cool. Ron Allen, Matt, Danny, Alfonzo, Tony, Eddie … Steve Ortega, Michael Crum (f—in’ champions). We didn’t all hang out all the time back in the day; we did our own things. Yet somehow there was a real sense of pride and unity then, but at the reunion it felt magnified. I think everyone felt the same. The Magnificent 7 release party, the Salty Dog Cruise, all of us there … it was f—in’ great! It felt new again.

[To Ron] Matt mentioned you guys spent most of the ’80s touring together. Can you talk about that experience? How did you guys push each other? Craziest s— you saw him pull?

Ron: In the ’80s, it was Matt and I roaming around America. We used to play jokes on each other. One time I clipped a girl’s earring to my nose and told him I pierced my s—! He couldn’t believe it didn’t hurt. I told him it was easy. [Note: At this point of the interview, Ron is laughing hysterically.] So he grabs some other earring and proceeds to put a hole in in his nose and completely hurts himself. I walk up and pull the clip-on off. Hella funny! Hensley had numerous stories of his touring days with Mr. Allen – most notably traveling over the Alps in the back of a van being driven by some “coked-up cowboy” doing 90 mph through the snow. “We thought we were going to die,” he says while laughing.

During that same conversation with Matt, I asked about Danny Way back in the day. Here’s what he had to say: “Danny was determined as f—! I’ve known him since he was 9 years old, maybe longer. He was at least five years younger than most of us and would slam harder than anyone. He’d then get back up and try harder  than everyone to nail whatever trick 1it was.”

A couple of weeks after the unforgettable trip I sat down with Mag at H-Street Skateboards HQ in Carlsbad, California, to catch up and get his now-digested thoughts on the experience. Here’s some of what the ringleader had to say:

Tell us about Schultes and Allen’s influence back in the day.

Mag: [Schultes was] highly impactful. He was an antagonist (in fun) and it really got the crowds into the mix. He was the first H-Street pro rider.

[Allen] was the first H-Street street skater. Essentially, he was the ambassador of street for us. We liked taking him to contests (even vert) because he was good for morale, always making us laugh. … He was the first pro skater who was also an actual artist.

What did it mean to you to have the whole crew together again after so many years had passed?

Mag: It was rad. I don’t know that all of us have been at the same place – ever. Maybe at the video premier of Hokus Pokus in 1989. Impossible to ignore the magic!

(When I asked Matt, he echoed Mag’s impression, saying, “I just couldn’t believe it. I was standing rampside watching all of my friends. Then, from across the pool NOFX starts playing! I felt like I was about to be arrested or something. It was perfect!”)

So did the reunion bring about reissues or … ?

Mag: Actually, it was the other way around. About a year or so ago, Danny, Matt and I wanted to do reissues of all of the Magnificent 7 decks – original artwork, every detail … . This led to talking about trying to get everyone together … somehow we pulled it off.”

Lastly, logistically, how difficult was it to actually put this trip together?
Mag: Honestly, it was pretty easy for me. All I had to do was make a few calls and make sure you and I made our flight to Miami. Matt did all the heavy lifting in terms of setup, cabins and passes for everyone, as well as coordinating the ramp with Skatepark of Tampa and scheduling “show times.” He worked his ass off. GET H-STREET HERE!