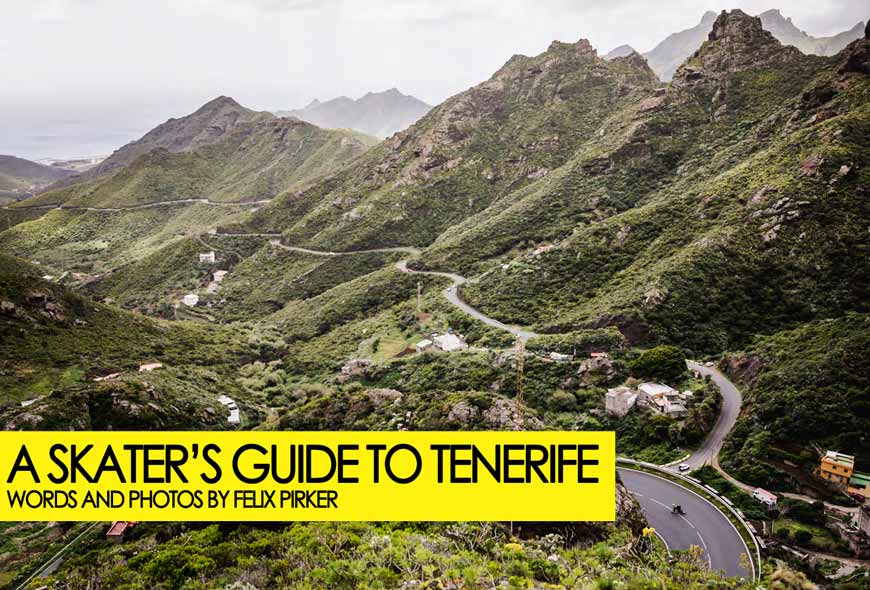 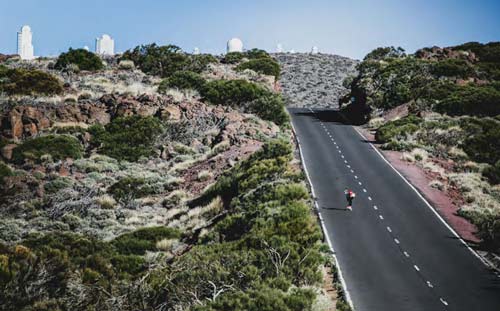 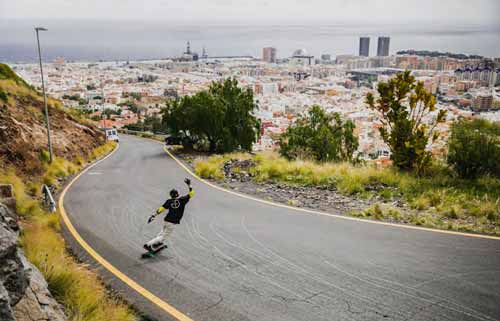 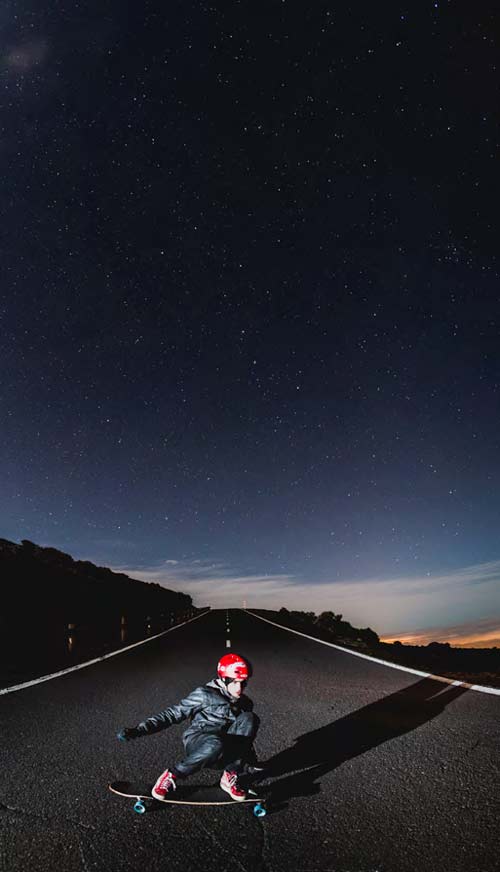 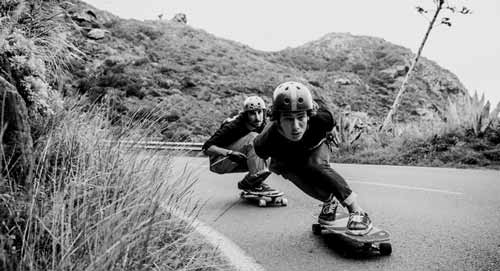 The island of Tenerife is the largest of Spain’s Canary Islands and can be found lurking off the west coast of Africa. Famous for its huge pre-Lent festival and a giant dormant volcano, the island also boasts beaches with sands that range from yellow to black, and a hugely varied landscape that could easily make you think you were on another planet. It is also home to some incredible roads, which was the main reason we were there. Our crew of Mirko Paoloni, Edoardo Bardi, Mariano Conti and Andrea Pedrotti stayed for eight sunny days.

On the south of the island lies the bustling city of Santa Cruz. If you go to or have ever visited Tenerife, there’s a good chance you will start your journey from here. This is where everything comes together for riders: seriously bombable hills above the city, a brand new skatepark designed by one of the X Games park designers and the most active nightlife on the Canary Islands. To top it off, there are surfable breaks too.

This spot is always worth a visit and was our first session of the trip before we headed further south to the infamous Anaconda road. Two scenic roads lead down from the beautiful viewpoint at Mirador Las Teresitas; one brings you back down to Santa Cruz and the other one takes you north. The road to Santa Cruz is a mellow scenic cruise about 3 km long. If you’re having a break up there, though, it might be best to keep your stuff with you and a wary eye on your car. On our first lunch break, a Bastardo inflagranti tried to break into our side window. Mirko spotted him and started shouting and running up to the car. But when questioned, the dude didn’t seem too stressed. He just started mumbling about how he had dropped a joint he had just rolled and was simply trying to find it. Clearly he thought it had fallen inside every car in sight, as all of them had scratch marks on their locks! Another car owner called the police, but the guy somehow wandered off and disappeared before they arrived and subsequently blocked the road, putting an end to our sessions there for the day.

This is certainly the most famous run on the island and a mandatory stop when you are there. The snake lies above a little village called Barranco Hondo and leads up to a handful of little farms. We spent two days filming and skating there with locals Santi Domingorena, Angel Diaz Cano and Sergio Henríquez Insúa. As you can see from the photograph, the surface of this road is gnarly. Really gnarly. The Anaconda claimed one victim from our crew while we were there. While Mariano was being filmed with the car, Sergio and Mirko took advantage of the shuttle service and took on some heavy full-run battles down the snake’s back. Way ahead of Sergio, Mirko’s board decided to stop while in the middle of a full-speed heelside slide. This put him on the hot seat at about 60 km/h and ejected him pretty much off the road, through bushes and out of sight. That was one of those moments where everyone collectively thinks, Oh, s–t. We all thought we were going to find him unconscious and seriously f—ed up, but luckily, when we spotted him he was still alive – but very shaken up. Not just mentally either; he was literally shaking. Blasting off the road at 60 km/h will do that to you. A trip to the hospital revealed a broken ankle that unfortunately put him out of action for the rest of the trip. The skin of this monster anaconda is definitely peeling off, so if you want to hit it, you’d better come sooner rather than

Probably the nicest name a bus stop could ever have, and also a fitting name for a fast and dry road, which Mariano and Sergio particularly enjoyed blasting down. The surface of El Bueno is really smooth, and it features a lot of corners as well as a breathtaking view over the Atlantic Ocean and the neighboring island of La Gomera. This year there will also be a BigMountainSkate competition for the first time at this spot.

This is where we called home during our stay on Tenerife. It is definitely a lot quieter than Santa Cruz, but in return it offers some more down-to-earth local bars and some of the best bocadillos around. You can fill your stomach with these amazing sandwiches for a very good price. As with Santa Cruz, there are also good surf spots along the coast to the north and south of the city. The famous surf spot Playa de Socorro is 30 minutes north from here.

This is the highest mountain in the whole of Spain, located in Tenerife and on the same latitude as Morocco. It’s also a dormant volcano! The winding mountain drive up there from our home in Puerto de la Cruz took us about 90 minutes. But it’s definitely worth having your camera ready, as this is one of the most remarkable drives on the island. It brings you from sea level to 3559 meters above it, through a landscape that could easily make you think you’ve traveled to another planet. The white mushroom-looking observatories dotted over the hills certainly add to this effect. The road surface that descends from the observatory is pretty rough and features the sort of giant cracks that seem guaranteed to trap you and your wheels. Once up on top, Edoardo and Mariano grabbed their boards from the car and started to shred, undeterred by the hungry mouths beneath them. Thankfully, there were no repeats of the Anaconda incident, and we came away with some mad photos and huge smiles. From El Teide we took the south route down from the volcano, which brought us to the village of Vilaflor. Onward from Vilaflor, the road surface vastly improved and we found ourselves cruising a freshly surfaced and mellow freeride track through pine woods. This is one of those simple but wonderful spots where you can just enjoy cruising a chilled road with a beautiful view. What more could you ask for? You could also have a little break at the bus stop of La Martela. There’s a high chance of running into some of the locals there, as it’s the best spot to park and turn cars when skating. From there you can enjoy the last 6 km down the road, which for the most part is facing the sunset. While there, by chance we ran into Angel, who then brought us to the Sliders House for beers in the evening.

On the southwest side of Tenerife, in a town called Adeje, there’s a house called the Sliders House. As you can probably guess from the name, it’s a refuge for skaters. We were warmly welcomed by Martin and his team. We gratefully received a tip about a road nicknamed Seaside, a place definitely worth its name. This is a steep road with a deep black surface that simply begs for thane lines. Edo and Mariano happily obliged and proceeded to paint their lines on the blank canvas with Edo effortlessly throwing down squats all day. We had no problems with traffic and were completely alone for the first half of the day before some new friends we made at the Sliders House the previous evening showed up in the afternoon and joined our session.

This road lies on the north face of the Anaga Mountains and is easy to reach from Santa Cruz. At a very rough guess, it’s about 40 km long and winds its way through the humid Tenerife jungle. At some points the gradient of this seemingly endless road can reach 16 percent, but it is very easy to spot cars and is a great road to ride. Just make sure to keep an eye out for cyclists, as they also like to roam around here.

After some free riding Jooz Hughes​ and Robbe Van Haverbeke​ went for a close run on a very cool spot in Tenerife. It had everything: the view and the curves. 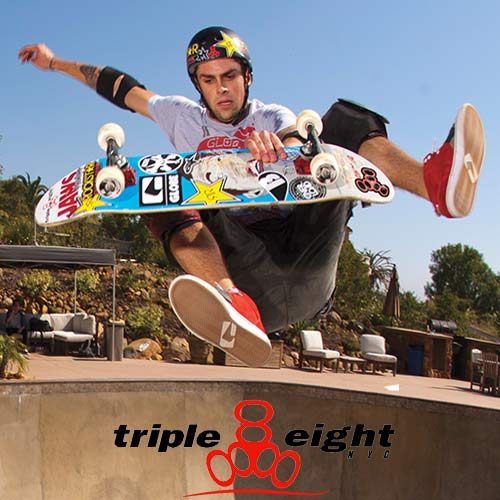