A pumptrack with a 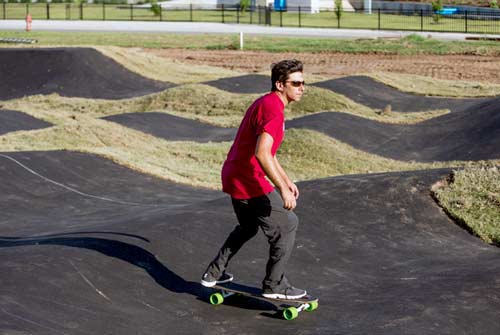 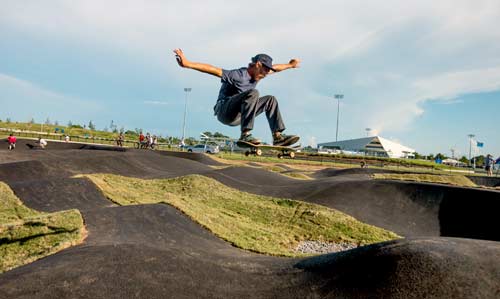 Mylaps integrated timing system will connect OKC’s track with other Velosolutions pumptracks nationwide for virtual competition. A portion of the funding for the track was provided as a grant from the Recreational Trails Program of the U.S. Federal Highway Administration.

“The Recreational Trails grant made the track possible, so we are very appreciative of their support,” said Mike Knopp, executive director of the OKC Boathouse Foundation, the nonprofit that oversees Riversport Adventure Parks. “Having this track will elevate the sport in Oklahoma City and provides a great opportunity for kids and adults to ride on a world-class track.”

The track is open to all ages; riders may bring their own bikes or rent one from Riversport Adventures. Day passes for riders with their own equipment are $10 for adults, $5 for youth under age 8. Access to the pumptrack is also included in Riversport day and season passes. Later this fall, Riversport will launch the Skateboard Supercross Academy, which will provide a progressive 18-week curriculum for individuals interested in learning to skateboard and willing to get involved in a racing league. Oklahoma City plans to host the first Skateboard Supercross World Championships in the
fall of 2017.

WOULD YOU LIKE TO GET A PUMPTRACK IN YOUR HOMETOWN?

To get a pumptrack in your hometown, contact your local elected officials with an email asking for a pumptrack as a proud resident of your town and community. Once you have done that, contact Velosolutions at concrete.wave@velosolutions.com and notify how you’ve already initiated contact with your local officials. To help support your desire, start posting social media pictures and share them with the hashtag #velosolutionsconcretewave #[cityname] and try to recruit as many people in your town to support the idea. Once this has been completed,  the rest is covered and you’ll be in touch with other passionate individuals who will help make you a legend in your town.

Skate Everything
Posted in:
SKATEBOARD 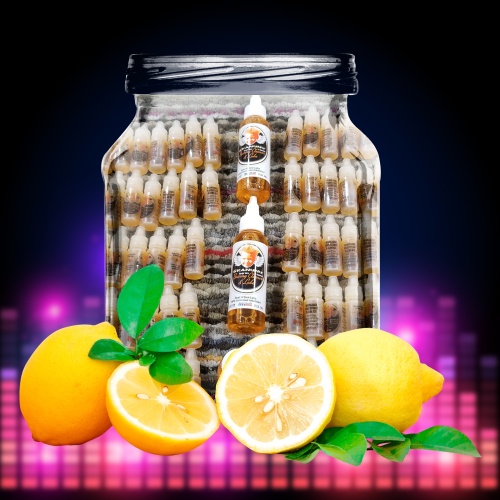