CW: This truck looks unlike anything else out there. What was your inspiration?
Dan Seismic: We started working on the earliest version of the Aeon in 2006, but the work didn’t come into full focus until 2008. The industry landscape was quite different back then. Virtually all trucks used for downhill and freeride were still very basic RKP designs. It was mainly in the slalom world that we saw CNC trucks with metal bearing inserts, variable-geometry baseplates, and so on.
The original concept was to integrate the function of a metal bearing insert with the hanger-bushing interface of a high-quality cast truck. We felt that this way we could bring the experience of precision geometry to a wider longboard audience. Little did we know it would take us so long to get the product to market! 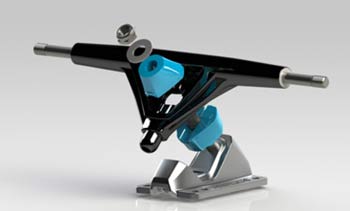 How long did it take from the initial concept to final production?
Let’s do some math. We started in early 2008 and worked through early 2014. Six years – oy!

What were some of the key surprises or unusual things along the journey?
Refining the unusual bushing design was the biggest hurdle. The first version had three parts: two hard and one soft. We realized fairly quickly that one of the hard parts would be too small and brittle, so we switched to a two-part design. But durably bonding the two parts together proved to be a formidable challenge. Unfortunately, we spent far too much time trying to make it work. Finally, I decided to mold some bushing prototypes as single-piece urethane parts, and we discovered that they worked much better than the previous multi-part samples.
After that, it took another extended period of time to dial in the bushing tolerances. Urethane parts bend and shrink in complex ways after you pop them out of the mold, and the Aeon bearing system won’t function as intended if the cylindrical bearing channels in the bushings don’t have the correct depth and width. Fortunately, we figured it all out! 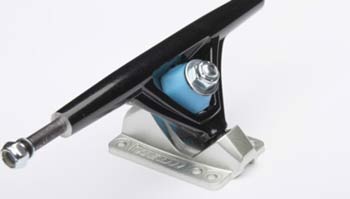 For those used to traditional longboard trucks, what can they expect in the ride?
When the Aeon top and bottom bushings come together, they form a cylindrical hollow that locks around barrel-shaped elements on the hanger. It’s a true bearing system with no added parts. The design forces the hanger to rotate inside the tubular channel in perfect alignment with the pivot axis. In terms of the ride, the Aeon system Concrete Wave had an opportunity to see a prototype of the new Aeon trucks several months ago, and we knew they were something special. Dan Gesmer of Seismic Trucks has created a truly unique truck and we are proud to showcase this revolutionary designeliminates lateral slop, and it aligns and stabilizes the geometry without the downsides of support pins, spherical bearing inserts, or hanger plugs. You get a quick response from the center and noticeably smoother, cleaner turns, even at deep lean angles that destabilize the steering of ordinary RKP trucks. 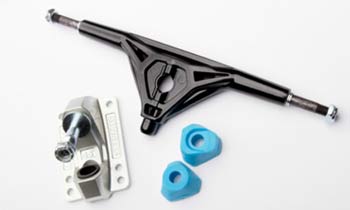 What exactly does the hexagonal bushing offer that regular bushings don’t?
The idea behind the wide, hexagonal shape was to create a smooth, intuitive resistance profile through a larger steering range. The Aeon bushings are tall but not too tall, allowing for deep turns with no dive. We also use a self-lubricating formula to prevent squeaking.

Who are the main types of riders that will benefit from this truck?
Anyone who enjoys clean, smooth, deep turns with control and stability! Downhill, freeride, LDP, slalom, and recreational riders should all dig the Aeons.

Any final comments?
Let me call out a special thanks to Doug Baxendell of Catalyst Design and Igor Burt of Protein Design. We couldn’t have developed the Aeon without their critical input.