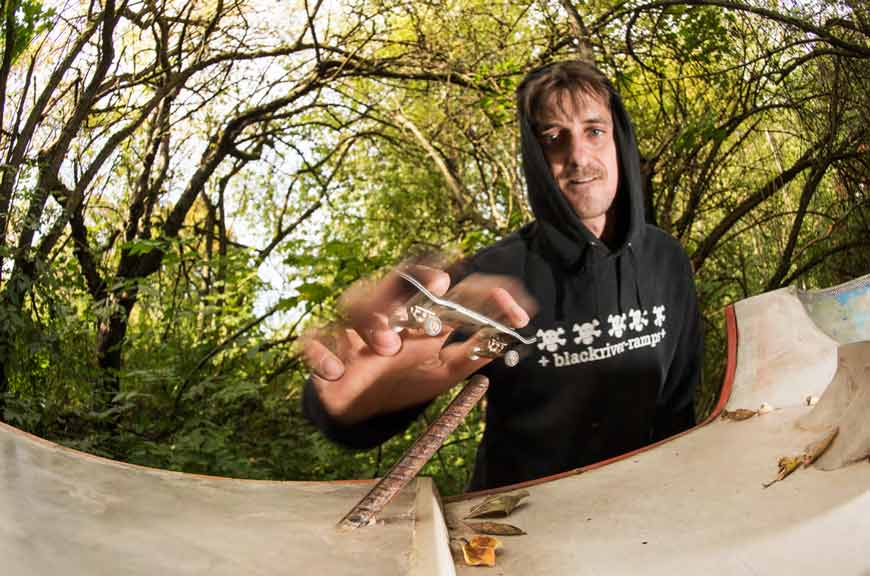 WELCOME TO THE CULT OF THE FINGERBOARD

Many people got their first exposure to fingerboarding in the Powell-Peralta video Future Primitive from 1985. Lance Mountain gleefully “rode” his homemade deck around a kitchen sink as Tony Hawk and Mike McGill looked on. Of course, well before then, people made their own fingerboards, but that sequence with Lance put fingerboarding on the map. A slew of companies started to make plastic fingerboard key-chains in the late ’80s, but it wasn’t until Tech Deck appeared in the later part of the 1990s that things really exploded. Here in North America, Tech Deck enjoyed a frenzy of interest.

Over time, dozens of skate companies licensed their logos. Both kids and skate collectors enjoyed the experience. But if you ask most skateboarders about fingerboards, they might just say “Oh, yeah … I had one,” and leave at that. For most, the fingerboard remains a curious artifact from youth. But Martin Ehrenberger had other ideas. He founded a fingerboard company, Blackriver, in 1999, and it’s still going today. Blackriver creates professional fingerboards and ramps and distributes a multitude of fingerboard product. Prices are not what you might expect. Believe it or not, Blackriver sells fingerboard decks for $100, and completes can be over $200. You can also buy trucks – $45 per set! Fortunately, grip tape is about the same price you’d find for regular-size grip. I am going to pause for a moment and let you absorb that last paragraph. 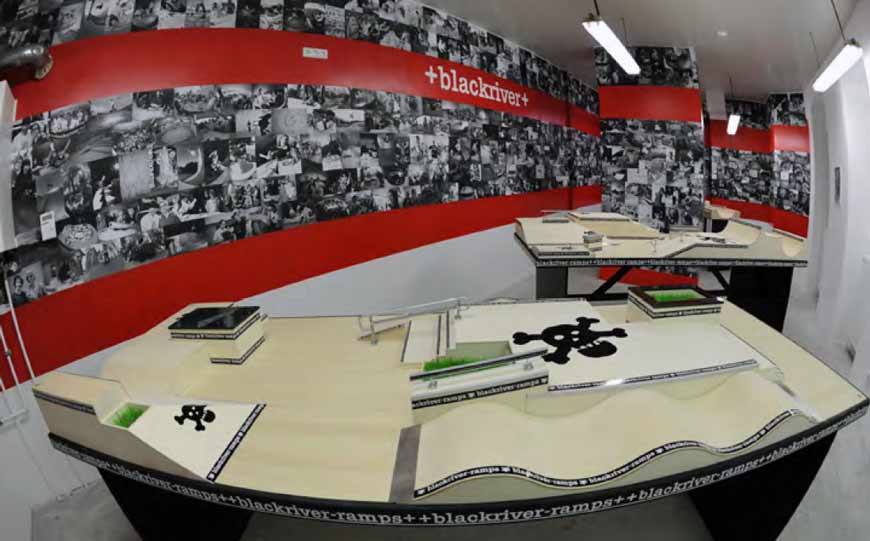 My first reaction about learning about this side of skateboarding was to laugh somewhat incredulously. But as I discovered, there is much more to fingerboarding than meets the eye (or the finger, for that matter). Though skate purists might dismiss it as a joke, there is no discounting the joy fingerboarding brings and the proud movement it has spawned. I first learned about the more upscale side of fingerboarding through Rick Tetz, who brought in some Blackriver ramps to his Vancouver shop, CALSTREETS @ Longboarder Labs. Rick also told me to be on the lookout for Martin when I visited the ISPO trade show earlier this year.

The first question I wanted to know is: What is it about fingerboarding? Isn’t regular skateboarding fun enough? “The fact is that through fingerboarding you can live skateboarding in another dimension,” Martin says. “It feels extremely good to be able to control the fingerboard like a skateboard. It transports a positive emotion, so it’s fun.” Martin also points out that fingerboarding is more easily accessible, and you’re not too dependent on logistical factors such as weather, places, etc. It doesn’t necessarily depend on your physical state that much. Fingerboarding enthusiasts find it as diverse as skateboarding and say it never gets boring, whether it’s finding or building new spots or being stoked about a new trick you just learned.

At ISPO I witnessed firsthand just how difficult it is to explain to people an alternative view of fingerboarding. As Martin chatted with prospective retailers, many were puzzled about what exactly he was offering. Martin has toiled in relative obscurity building a global network of fingerboard enthusiasts. I could sense how much blood, sweat and tears he has put into fingerboarding. He isn’t just passionate; fingerboarding resonates deeply with who he is as a skater. In fact, once you get over your preconceived notions, you begin to realize that most fingerboarders ride skateboards.

Fingerboarding is merely an extension of who they are as skaters. “Of course I skate. I’ve been riding for over 30 years!” Martin exclaims. “You start fingerboarding and after a while you notice that it’s fun,” Martin says. “You spend a lot of time on it, and naturally you want to have professional equipment eventually.” He says it’s the same in every field, whether it’s skateboarding, music, whatever. “In skateboarding you may start with a plastic board, but as soon as you realize you are hooked on it, you want to have better, more professional product.” Blackriver seems to have successfully cultivated that niche. 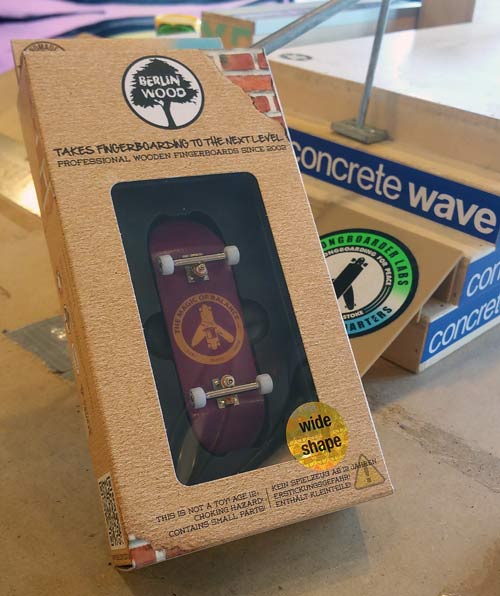 In May 2016, Blackriver will be hosting the ninth fingerboard world championship, called Fast Fingers 19. At the last championship, more than 100 people registered to compete, ranging in age from 7 to 32. People from 20 different nations will descend on the northern Bavarian town of Schwarzenbach to compete. “Our competitors take fingerboarding seriously,” Martin says. “They are mostly professionals. And of course they want to have professional setups to do their tricks as precisely as possible.” They’ll also be able to enjoy seven different skateparks in the region along, with DJs and a best trick contest (on regular skateboards). One quick glance at a numerous YouTube videos shows hundreds of stoked participants, spectators and curious onlookers.

So what does it take to be a pro fingerboarder? Martin can put his finger on it. “There are pros who can do every trick you want them to do,” he says. “They have skills the average fingerboarder dreams of at night. They’ve been around for decades and the scene celebrates them. Kids want signatures and photos with them. It’s basically the same as in skateboarding.” And if you have fingerboard pros, then sure as day follows night, there are actual Blackriver fingerboard parks store in Berlin the material, unless you buy a gold watch. Instead you pay for work, and these custom products take a huge amount of work to create.”

As if all these reasons weren’t enough, Martin did come up with the final reason that will probably blow a few minds: “Why should a fingerboard be cheaper than a skateboard, just because it’s smaller?” Why indeed. When I picked up the Blackriver catalog I noticed a phrase on the cover: “an entire universe in your hands.” I asked Martin to explain that statement in detail, and you can see he’s given it a lot of thought. “It’s a whole scene with all its characteristics,” he says. “Fingerboarding developed from skateboarding, but it’s a universe on its own. It’s like a sub-scene within a scene. That’s one reason why I’d call it a microcosm.” Martin sees a lot of similarities to skateboarding. “The emotions are similar but on the other hand it’s also very different.” Martin recognizes that fingerboarding is a niche activity. Despite this, I think Martin is right when he says it has all the components of a subculture. 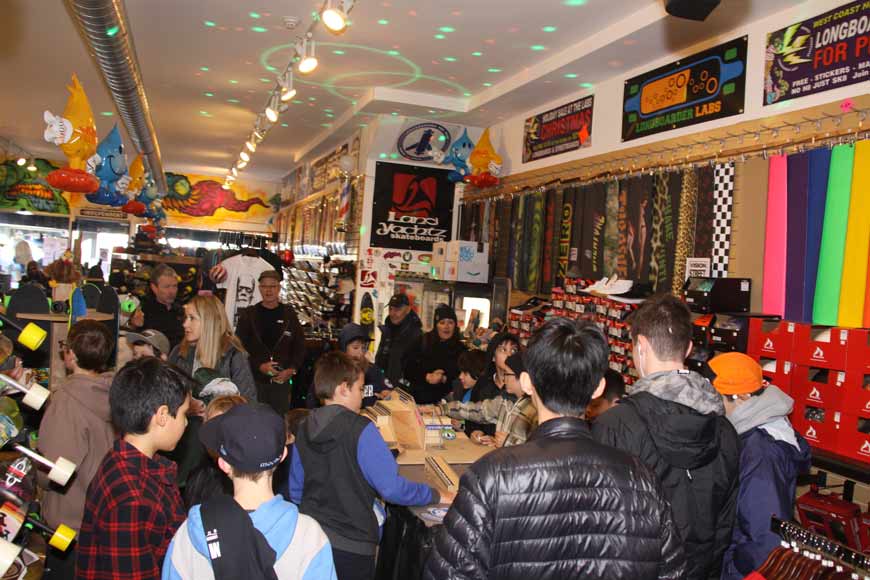 There are local scenes all around the globe. People organize events like sessions, contests and even art shows. Beyond that, Martin says, “Believe it or not, there’s a concrete fingerboard DIY scene, too. At the world championship all those people meet every year; it has been steadily becoming a worldwide community throughout the years.” This is the stoke that Martin and his fellow fingerboard enthusiasts have helped create. These folks looked beyond what most could see and realized there was a creative energy that could be promoted.

Here our story takes on a very different turn. It’s no secret that professional fingerboard tours. In fact, in 2008 the Blackriver Fingerboard Team hit the USA with 12 pros. That’s right – fingerboard tours are exactly like regular skate tours, but you don’t need to rent a U-Haul to fit all the extra gear.

Blackriver has been doing tours for the past 16 years. “Our team riders traveled the world,” Martin says. “We were on South Korean TV, and have and performed at dozens of trade shows for companies like Nokia, Canon and Gillette.” Despite all that I learned about – the fingerboard graphic artists, the fingerboard magazine, and of course fingerboard groupies (actually that last one may take some time), I still couldn’t get over the fact that the high-end fingerboard completes were in fact more expensive than regular skateboards eight times the size.

But Martin is keen to point out,  Professional fingerboarding is niche. All products are handmade or locally produced in small batches. For that price you get a high-quality complete setup (deck, trucks, wheels) and not a cheaply mass-produced crap board.” The other thing that never occurred to me was what happens when you drop down to one-eighth the size. But it’s essential to have precisely manufactured boards, trucks and wheels in fingerboarding – even more so than in skateboarding. “The downsizing of the equipment demands more,” Martin says. “If it’s not precise, you’ll notice every minor deviation. This means you will lose pop, or the board would spin weirdly.” 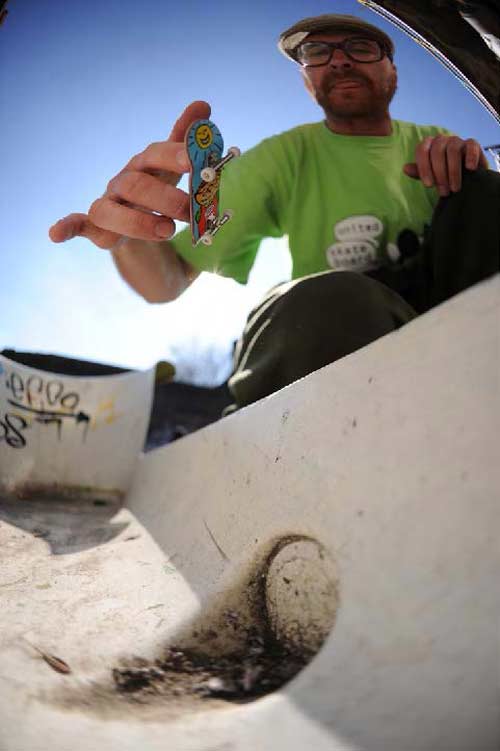 Blackriver’s products are handmade in Germany, and they’re high quality. You can see it with your own eyes, and of course feel it with your fingers. If you think it’s easy to make a seven-ply fingerboard, think again. “Way more work and innovation are necessary than for producing a regular skateboard,” Martin says. “Sure, it’s less material, but for most products you don’t pay for retailers of all kinds face a challenging environment nowadays. The retail landscape is changing, and the mall coupled with the Web have made it even more difficult to remain in business. When it comes to skate shops, the independent skate shop is a great place to hang out when you’re growing up. Mall stores can try to duplicate this vibe, but’s not the same. Independent skate shops can plant a park in the middle of their shop and see where it takes them. My sense is that a fingerboard skatepark could connect with young kids and plant a seed for a lifetime of rolling.

I wondered if there was possibly more to fingerboarding than you see at first glance. I asked Martin what he thought. “Setting up a fingerboard park will bring the kids in your shop,” Martin said. “It’s an interactive, community-building element, and people will start to develop an emotional connection to the store. It’ll get away from a pure ‘consumer station’ to an animated place, where people want to stop by, hang out, meet like-minded folks and pursue their common interest.” Could the power of fingerboarding connect customers and shops to the core of skateboarding? For Martin, the answer is a resounding yes. The way he sees it, every kid who is interested in fingerboarding is naturally interested in skateboarding as well. “If the kids don’t skate yet, there’ll come the day when they will,” Martin says. “Since the physics of tricks in fingerboarding and skateboarding are the same, they will have learned all the tricks by then. They just have to apply the same technique with their feet. … If they have developed a positive connection to a store, since it’s not just a corporate, cold, ignorant place, then they’ll most likely get their future purchases there.” Demographics are destiny, and this is very true in skateboarding.

The sport is very much like a pyramid, with a great deal of young riders at the bottom. Martin acknowledges you want the “cool” older skaters in your store. “But do not underestimate the kids, since they are the future,” he says. “If the ‘cool’ adults are really cool, i.e., having a broad horizon, [if they] skate for fun and not for proving themselves, they won’t mind a fingerboard park in the store.” There is always a new generation on its way to skateboarding.

Some will get a fingerboard as a birthday present. Some will enjoy the fingerboard experience for a few days and it will either break or get lost. But some kids will be hooked and in no time will be begging for an upgrade. An entry level upgraded fingerboard starts at around $20. This is almost ten times what you’d pay for a Tech Deck. But if someone has been bitten by the fingerboard bug, $20 is not outrageous. Soon they’ll be hanging out at the shop, then out skating with their friends, and before you know it, you’ve got a skater for life. Martin Ehrenberger wouldn’t want it any other way – and for that matter, neither would I.

An extended thank you to Michael Brook at Concrete Wave Magazine