Maryhill. The name is spoken with reverence in skate circles. It doesn’t matter if you skate vert, pipe, park, street, slalom, freestyle, or downhill; almost everyone in skateboarding knows stories about this famous hill and the skaters who slay it. To be able to say you skated Maryhill Loops Road is the equivalent of being able to say you skated the Arizona Pipes back in the 1970s. Both are places skaters dream of skating, but not everyone has the balls or skills to skate them.

One group of hardcore skaters that ride this famous hill is known as the Maryhill Ratz. Since 2008, the Ratz have organized numerous freerides – sessions on a closed hill and free lifts back to the top – to allow riders to experience this amazing road in a non-race environment.

When Dean Ozuna from the Maryhill Ratz invited me to come to their three-day SheRide last August, I really wasn’t sure what to expect. The SheRide is an all-girls skate weekend – just rad girls flying fast down that hill for three days straight. They kick ass, they sometimes get hurt, and they suck it up, get back on their boards, and do it all over again. I knew a lot of these girls already, as I had connected with many of them via social media over the years. But I had no idea what it would be like for a downhill newbie like me to enter their world and to have my first time be at the legendary Maryhill.

Beyond having fun, this year’s SheRide had an extra meaning. Just weeks before the event, a fast-moving fire had whipped through the area near Maryhill, and the Wolfe family, who live at the bottom of the historic hill, lost their home and everything in it to the fire. Being the wonderful group that they are, the Ratz decided to open the event to all skaters, male and female, and make it a SheRide/Wolfe Family Fundraiser. The entire Wolfe family has been super supportive to the Ratz over the years, so all the skaters immediately jumped on board with opening up the SheRide to everyone to help give back.

From the moment I arrived, I was blown away by the Ratz’ kindness and sense of community. It was truly like the skateboard family we all created in the 1970s, when we were all just renegades doing our thing and stoked every single day to be among people who loved skating and were like-minded. I felt as if I had been transported back in time and was reliving all the good memories skateboarding created for me back in the day. 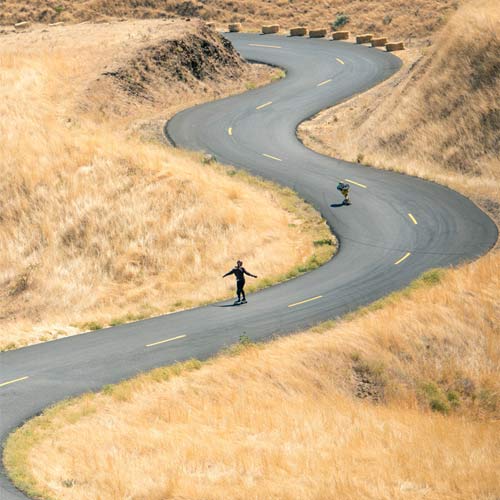 For those who were not skating in the 1970s, I would compare the scene, the people and the entire weekend to Woodstock or the movie Almost Famous, but instead of musicians or hippies, just insert “skateboarders.” Everyone shared what they had or brought – food, tools, leathers, wheels, gloves, tents, camping spots, secret skate spots, lunch, etc. It didn’t matter what you needed, someone stopped and helped. People were nice to everyone they came in contact with. The sense of family and community was overwhelmingly positive.

Female skaters showed up from as far away as Canada and Australia, and drove or flew in from all over the United States. A group of downhill girls called “Girls Gone Fast” had started a Kickstarter campaign to raise funds for their road trip. They rented a van and drove in from Colorado, stopping to pick up other girls along the way. They skated everything they came across, shooting photos and filming one another before they arrived at Maryhill. It’s very cool to see girls creating opportunities for themselves and creating media to support women in skateboarding along the way.

I watched as numerous female skaters took time out of their weekend to encourage and help a new rider, 15-year-old Nora Manger. She went from sitting on her board and easing her way down the hill to get a feel for the turns and how fast it was, to standing up and riding by the third day.

I experienced the same treatment myself. Many girls that weekend reached out to tell me I was doing great and to keep on going. They hung out and helped me work on my form and graciously got off the U-Haul with me when I started from “Cowzers,” which is only the last section of the hill. When downhill is nothing like the type of skateboarding you have been doing for over 30 years, it’s an awesome feeling to have these top female skaters working with you and giving you positive tips.

The other thing I noticed is that these girls get hurt from time to time. Serious road rash is the most common, and it’s sometimes inevitable when you are doing speeds like they are. But they don’t whine about it; they head to the EMT tent, get fixed up and head back out. These female downhill skaters are a tough breed. I have nothing but mad respect for all these girls. 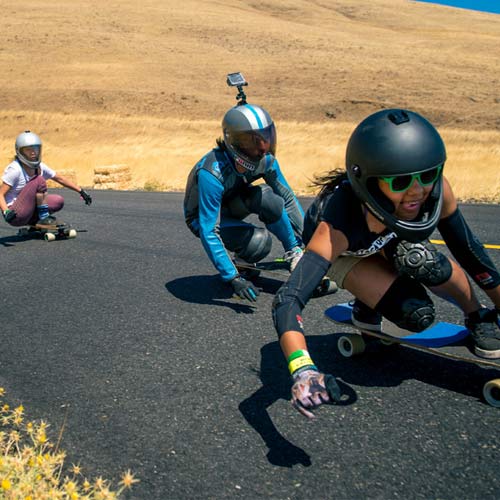 The Maryhill Ratz crew also likes to make their own fun. On the second day of the event they do a “dress run,” on which skaters put on dresses (instead of leathers or their normal protective clothing) and ride down the hill. They also do a “naked ride,” which is exactly what it sounds like: nude skaters with helmets, gloves and sneakers racing one another down Maryhill. I had seen and heard about both these portions of the SheRide over the years, but I was grossly mistaken in assuming they took it slow and it was just for the cameras to capture some crazy shots. I was 100 percent wrong. They were going as fast as always, and fully committed.

These female downhill girls are wild, crazy, fun, committed, rad and totally bad-ass. They skate hard and fast, they blow past guys and don’t make apologizes for kicking butt. They own it. But most importantly, they are supportive of one another – on and off the hill. They are family.

I have been a skateboarder my whole life and have seen many changes, good and bad, in the skateboard world over the years. But as I was on the plane home, feeling tired and happy, I had one major thought after experiencing my first SheRide … Skateboarding, its soul and its “we are a family” spirit have not been lost. These skaters are truly keeping it alive and well. Thank you to the Maryhill Ratz, Dean and Ali and all the skaters I met!