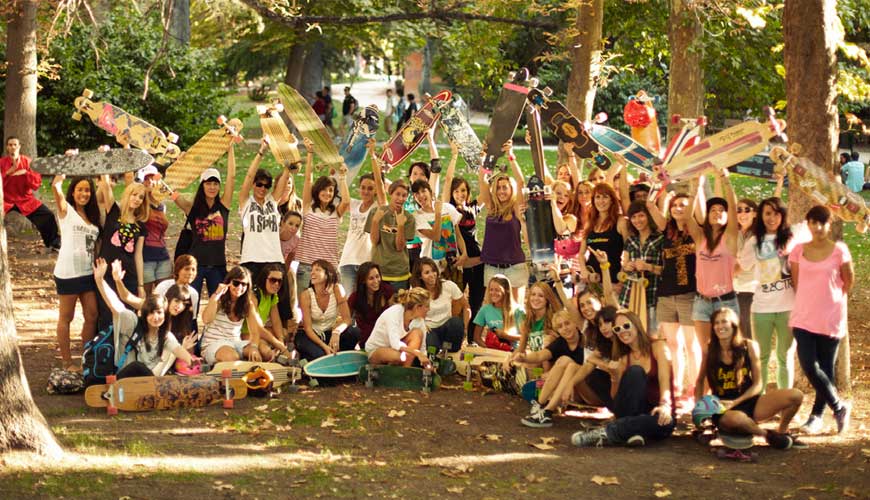 Editor’s note: When I heard that Valeria Kechichian had given a TEDx Talk in July, I knew it would address some key issues. I was eager to find out what exactly she had presented, and I asked for a copy of her talk. I wanted to ensure that all CW readers got an opportunity to read her words. They are powerful and I am sure they will resonate with many readers. Take the time to view Valeria’s TEDx Talk and reflect on her message.

My name is Valeria, and I’m a 35-year-old skateboarder who developed the current biggest community in the action sports industry based in love and camaraderie values.

Yes, I’m 35 and I’m a skateboarder. I’m not as skilled as Tony Hawk gracefully killing it as a senior skater. I’m actually clumsy and try not to die every time I step on my board. I didn’t start skating as a kid and have it inside me. Rather, I started skating at 28 as an almost desperate measure while trying to quit alcohol and other really bad habits in my life.
I’m [in] the third generation of Armenians born in Argentina after my great-grandparents escaped from the Turkish genocide. I haven’t had an easy life. I ran away from Argentina when I was 20 because my family’s situation was a bit out of control.

I arrived in Spain 15 years ago, alone and with no money, and things weren’t easy at all. I did every job I could, and I always tried to make the best out of it. Still, I spent most of those years getting in and out different addictions including drugs, alcohol and eating disorders, until one day, at 28, I decided it was time to stop and uncomfortably dig inside me to see what was causing all these problems. In the process, I realized I needed healthy leisure activities to replace the bad ones, and that’s how I started skating at 28 years old.

I never fitted in any of the roles or obligations society wants to put us in. I never fit in at school, high school or at any of the different corporate jobs I had. Now I lead the biggest female movement in a man’s world. 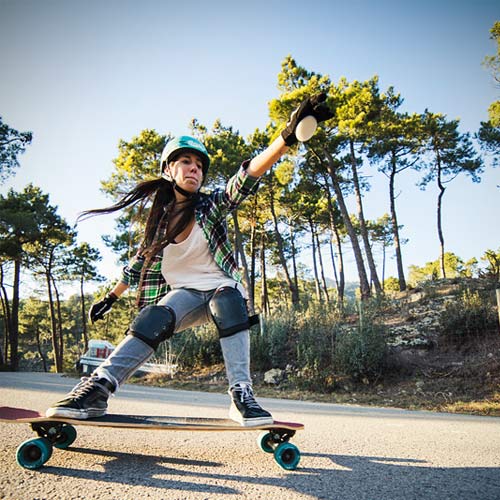 Most of my friends laughed when I told them the theme for today’s event. I think I’ve been shaking up the order since I was born, and I guess my mom (who’s today in the audience) could confirm that. Right, mom?

If you grow up with a mainstream western education like me, chances are that you have been taught what you need to do at every age – what they expect from us at every age. We are born, we go to school; we’re all the same. We don’t focus in any particular gift we may have; we have to fit in. Since the time we are little we live in a society where the meanest wins: It is strongest and ruthless for boys and the prettiest and meanest for the girls. And this never changes. We graduate, find a job, go on holiday three weeks per year and try to survive in this jungle following these rules someone made up for us. We vote and choose politicians who openly lie to us and most of the time have wildly stepped over their opponents outside and inside their own parties to get where they are.

We buy what they tell us to buy and eat what they tell us to. We believe whatever the manipulated media worldwide wants to sell to us and rarely feel excited about things because at some point we cannot hear or feel for ourselves anymore. And this is what I think they teach us. This is how they have us in control.

When it comes to women, among many other things they make us chase these ideals that are impossible to achieve regarding youth, beauty and body shape. They make us think, in a not so subliminal way, that our looks are more important than anything else we can offer to the world … instead of trying to reach our true potential. We’re also often portrayed as trophies and highly objectified. The main message is DO NOT LOVE YOURSELF.

All this is linked to a deeper habit in our society, where small girls should not get dirty or do anything too dangerous and young boys cannot be sensitive or express any feeling. And this is what women in action sports are. Even some top athletes think it’s better to show their bodies instead of their 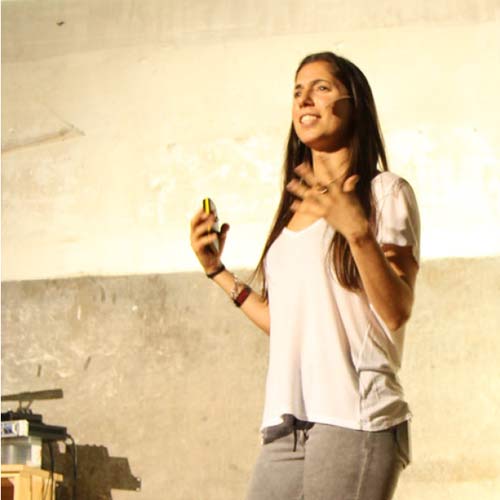 skills. Women are not portrayed doing things that are too dangerous or require high skills. The boobs and the ass still sell better because that’s what they have been teaching to us for the past 80 years. We don’t know any better … or that’s what they think.

We created LGC back in the summer of 2010 in Madrid to get more women into our sport, longboarding. We realized how much fun we had when a bunch of girls that usually rode with men got together, and we wanted to create more of those situations.

At first it was something local. We shot group videos showing how much fun we had together, and apparently that was never done before. We portrayed women doing something fun and accessible supporting each other, not competing. That feeling we transmitted resonated in many women (and men) around the world, and that’s how we got women excited on longboarding worldwide.

Many years of hard work later, we’re the biggest community in the action sports industry. We get millions of views of our videos and are present in 200 countries, with official crews and ambassadors in more than 70. We created something empowering for women in the sports field that was not based in competition but on camaraderie, love and support. We broke the mold, and acted with love.

I also felt that the bigger we got, the less happy some of the big boys in the industry were. The guys that have been running the action sports scene and business since its beginning felt they were losing control. We are giving power to women not only through longboarding or skateboarding but through that feeling of stepping out of their comfort zones, doing something they never thought they would – and that feeling affects your whole life. It gives you the empowering sense of freedom. For us, skateboarding is the tool. You choose your own.

This has not been an easy ride, and many people will try to bring you down. People fear things that are done differently because that’s what we’ve been taught. We’ve been taught different is bad. We’re not in the box, and that means we’re not under their control anymore.

Living outside the box can be scary. It was definitely scary for me and sometimes it still is. You’re working for something you believe in but you have no monthly salary, no “security” and as in my case, no savings. Everyone around you tells you you’re crazy. Suddenly a lot of people hate you for reasons they’ve made up, and even my parents were freaking out about my financial situation. You’re scared enough and you have to deal with everyone’s fears projected on you.

But the truth is, nothing ever felt so right in my life. I’ve never been so sure of anything else,

and my life has never made as much sense as it makes now. I work every day for change. I want to believe I work to make a difference in the world. I work every day for women I don’t know, and I face many problems every day of my life. But I believe in what I do, and I believe greatness comes to the thinkers and the changers, to the people the people that are not afraid to fight hard and work harder, even if that means fighting alone. It’s time to wake up.

One day, I realized something with Longboard Girls Crew. When we started getting together and joining forces instead of competing between us, and actually achieving big things and getting much stronger, it made me realize that this same thing we are doing in a longboarding community could actually be applied to every discipline of every field in every country in the world. That we have been doing it all wrong all this time because that’s what they taught us to do.

They make us think that there are so few spots for women in action sports, in business, in politics or any field that’s male-dominated that we have to fiercely fight between each other and compete for those few spots, when the truth was absolutely different all the way: We will only REALLY make it if we stick together. Because I believe that WE as women and WE as a society have much bigger power and potential than what they want us to believe. With what we did in our sport, we’re inspiring women worldwide to use the same camaraderie forces and apply them in their own fields.

Sheryl Sandberg, Facebook’s chief operating officer, explains it perfectly in her book her [2014] book Lean In: The more women help one another, the more we help ourselves.vActing like a coalition truly does produce results. In 2004, four female executives at Merrill Lynch started having lunch together once a month. They shared their accomplishments and frustrations. … After the lunches, they would all go back to their offices and tout one another’s achievements. They couldn’t brag about themselves, but they could easily do it for their colleagues. Their careers flourished and each rose up to the ranks to reach managing director and executive officer levels. The queen bee was banished, and the hive became stronger.”

The world is changing fast. The collective consciousness is awakening, and that means we all are. The market is changing because we are. Now is the time to start doing things in a different way than the established order.

It’s time to shake things up – but not with anger or in fear. Very angry people only want to fight, and fear has broken more dreams that actually trying.

I want to change things. I want to learn. I want to educate. I want to inspire and be inspired by others. We all have our baggage, but we’ve got to let go in order to get things done and most importantly, be happy.

Today, the biggest revolution is love. Be revolutionary.