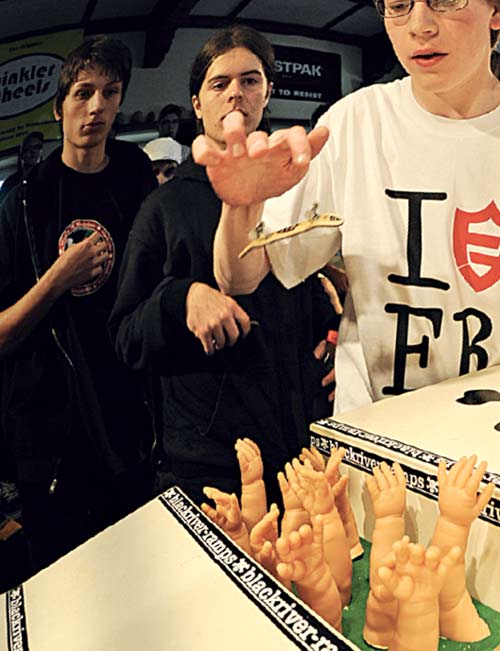 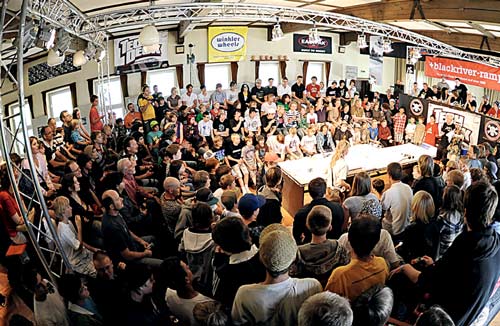 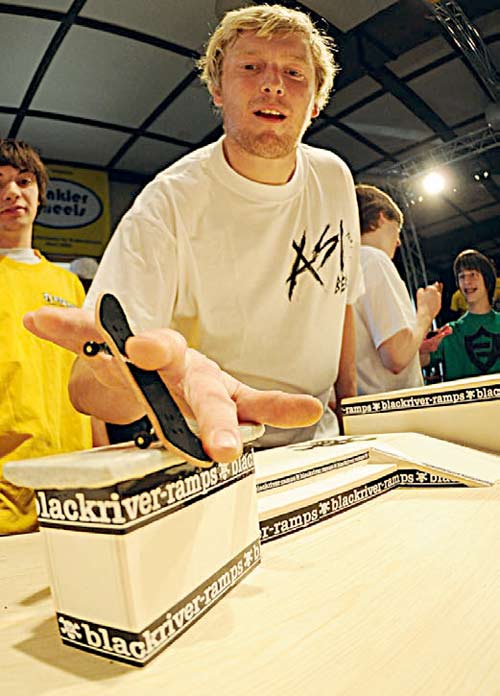 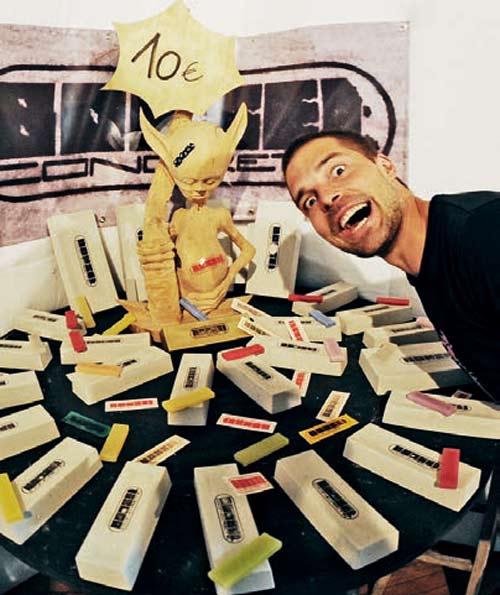 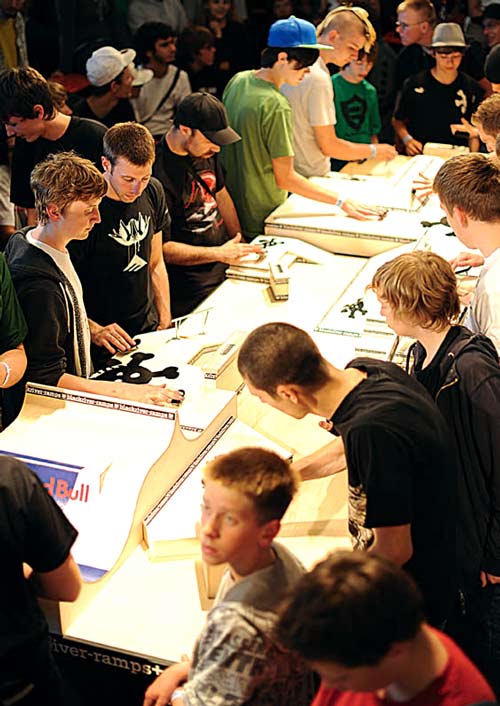 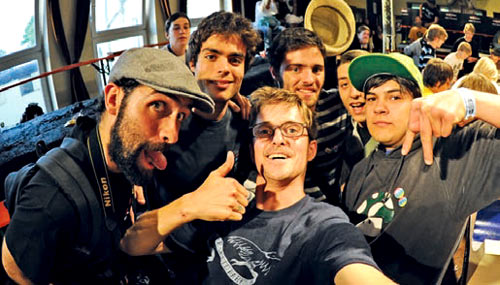 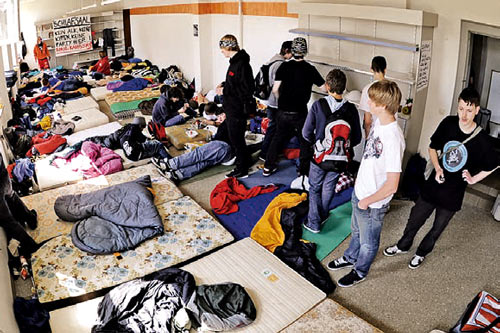 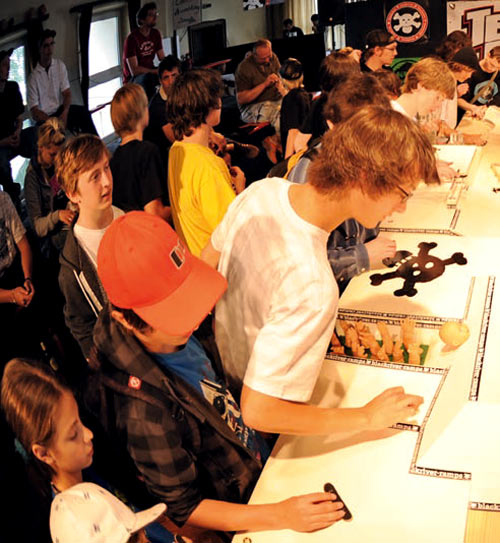 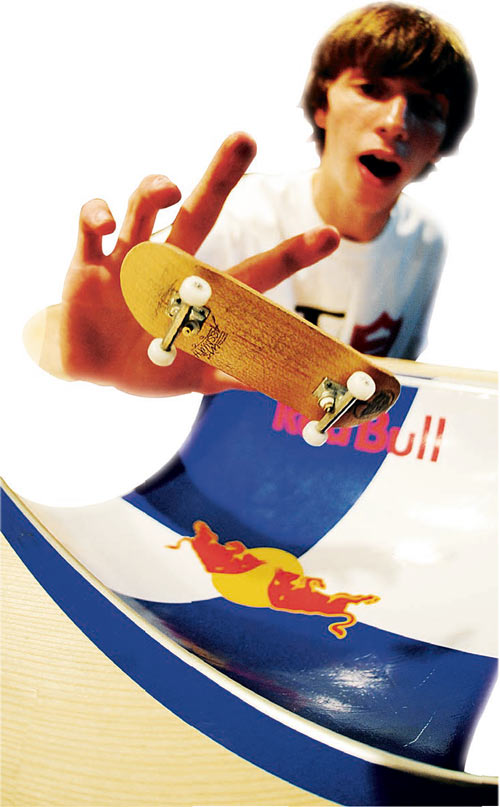 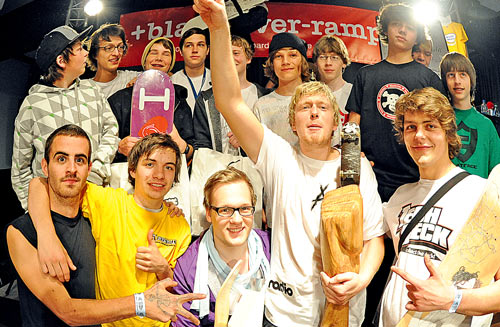 The second world cup is over and this year it really deserved the predicate “transnational competition”! Fingerboarding is international. Period! This is nothing to be discussed any longer. there is no need to name all the single home countries of the riders. Instead we would like to expand the list of people participating to also include fingerboarders from Asia, South America, Africa and Australia in the future! Everyone who didn’t make it to the contest had a chance to follow everything on-line through our live blog and online live broadcast. We are not just talking about a simple live cam covering the contest from one corner of the contest area like back in the days. This year two camera operators were walking around capturing more details and perspectives.

The event took place in an old administrative building of closed porcelain manufacturer. This abandoned building had rooms to crash over night and it has an old dining room for porcelain workers. This room had a nostalgic 60’s look and it almost felt like a timewarp.

Our intern Olli was highly motivated preparing a lot of things for the contest and he is to thank for more than 50 mattresses for visitors in the sleeping rooms allowing an invigorating sleep. This house looked chaotic but the visitors took the offer anyway. the upper stories were haunted by the ASI-Berlin crew, the NWD Crew, and riders from Italy, Spain and Portugal.

The contest itself started Saturday. However, as early as Thursday more people were present than in the years before during the contest. the fingerboard documentary “Get a life” by Fabian Schreiter premiered Friday night with so many spectators the “cinema hall” was bursting at the seams. people really liked the documentary and I remember a relieved Fabi. He was more than nervous before the premiere.

We where expecting more people to show up Saturday morning but were surprised how many cars kept on arriving here. In the end we had to redirect the drivers to a second parking lot nearby.

At bigger contests it is always a good idea to have multiple tables ready for the fingerboarders, and a session was even possible when getting fresh air outside on the terrace where Nic’s wood bowl and the famous drainpipe could be found.

It is a little frightening having to judge the runs of 136 (!) riders. Everyone deserves to be judged fairly and at the same time it is extremely hard for the judges to concentrate on the single runs for 5-6 hours straight. Lucky for us the fast fingers has at least 8 judges available at any time and we made sure the “jury” was international. With almost 150 riders the contest-format needs to be adjusted. the first round every contestant had a 45 sec run with a cut to 30 people playing 15 GOS in the next round/ The 15 GOS winners had an other single run in round 3 and the top 5 riders made it to the finals where they had a 5 person GOS.

For everyone who is into numbers and statistics it might be interesting to know only 4 girls participated. It is less than 3% of all riders and we hope this will change next year. We know that there are more girls fingerboarding than one might think. Curiously enough we had 7 riders with the first name “Jan” and 5 riders called “David” to enter the contest. more Jans than girls… But let us skip the numbers.

The army of Jans and Davids were busting some crazy tricks and it is amazing how self secure, stylish and ambitious most runs were.

The first cut made it clear that Elias was more than ready to defend his title. however GOS (game of skate) is always an unpredictable factor leaving enough space for multiple results in the end. When all is up in the air a competition gets more exiting not just for the spectators but also for the riders. people were gathering around the contest table all the time. The flow of the contest was well timed, it was amazing to see the crowd not getting bored and during the 5-person GOS the place turned into a seething cauldron.

I know a lot of people would have put their money on Elias or Dimitri but in the end Timo Kranz managed to win the competition showing unique tricks. Timo Kranz is the well deserved 2009 world champion! The best part was how easy Elias took it. With a smile he was psyched for Timo! Everyone who ever witnessed a partying Timo Kranz cans imagine how happy he was to win the FF12.

Martin Winkler always has some fun new ideas and this year he was dressed like a golfer playing fingerboards billboards shooting his board down the stairs with a golf club. After the awards ceremony Winkler had prepared another special thing. He suddenly appeared with a cake and candles at the contest table and people were wondering who might be so lucky to have birthday during the FastFingers. Everyone sung a birthday song for Blackriver Ramps together as loud as they could. Everyone except Kroger, who I think had already lost his voice the day before. 10 years of BRR! The birthday marking a decade is cool but how can this be the 12th FastFingers with BRR only being 10 years old? In the first years of the competition were extremely small and FastFingers was held more than once a year. It amazes us how fast the competition has grown in the years. The traditional raffle was characterized by huge amounts of free stuff by numerous sponsors. The star prize was a Big-Mini and again this year it was won by a kid not much taller than the ramp. The raffle moderation was led by legendary Tony Montana, one of the most relaxed persons to walk on this earth.

For most people the competitive aspect is not what makes them go to all the events. It is nice to test your own skills competing but luckily only few are extremely eager. The focus is set on meeting old and new friends and having a great session.

The premiere of Fabi’s DVD inclusive bowl session the day before the contest, as well as the after-show-party are at least as important as the competition itself.

The part took place at the bowl to seperate the party-location from the sleeping hall. Fingerboarding attracts all generations having all people of all ages gather for the FastFingers. Older riders should have the right to party and minors should have a quiet place when the party is over for them. To organize the party-chaos securities were hired. One of the two securities seemed to be pure over-confidence in person or he just tried to outdo Raoul Duke. At least he was more nervous than a doorman at a Alice Cooper concert, made hilarious gestures and told weird stuff. During the party he ran square to Elias and co. and yelled “Hey, I do no not want to hang out with you guys any longer in 3 – 2 – 1 ….!”, turned around and left! Scary!! We later told him tall tales about a new security labor union and we where sure the evening would end with someone getting into a fight with this guy but nothin happened.

The after show party offered a lot of fingerboarding and skateboarding. Phieler with band and Dietschi were the live acts of the night and later Winkler completed the music program as DJ. well done!

The announced Red Bull Rail Contest was also held in the evening. A lot of people were having a nice dinner at the pizza place down the road, but so many people from the contest went there thay were over- crowded and some people had to wait 3 hours for their food, missing the Rail Contest. Either way, they were excited to eat some authentic German Schnitzel or some good pizza there. Just like during the day our BRR intern Olli created a cheerful atmosphere. He is unable to sit still even for 5 minutes and with a megaphone and the prize money in his hands he had no problem whatsoever to gather people around the rail for this special competition. This was a one trick one try contest. Do or fail! In the end only few made their tricks is no surprise since the rail is a thrilling obstacle and the riders wanted to show somethin special.

Two riders were standing out: Kuny with his special heelflip boardslide (with crazy own style like no one else) and Wille with his bigspin frontside bluntslide. The audience had to decide who the winner is and they were more impressed by Wille’s trick. It was a more than narow decision and I have to admit maybe I was not completely neutral when I had the megaphone in my hands. I hope Kuny is not mad at me, he rocks and is a cool guy!.

NWDC Martin B., who recently took home prizes in both categories of the Ride Glory challenge, was funny when grabbing the megaphone trying to convince the audience to vote for him promising the prize money to be turned into beer for free for everyone. Nice try, Martin!

Three “unknown” and self-proclaimed artists handed out a new franzine containing pure madness. It was some kind of folded poster fanzine. The world needs way more such tiny art-projects.

Fingerboarders somehow have always had a DIY mentality. Apart from the fanzine it could be seen throughout the entire weekend when numerous small fingerboard companies presented their products and innovations to the crowd. The kids are always into trading stuff. The first line of Flaked boards (old Short-wood) amazed me and the Yellowood guys had brought some nice looking prototypes. Wunsiedel-Flo presented a lot of obscure and stylish bonsei curbs and again I was amazed by the variety.

Fingerboarders are creative and this makes FastFingers and other contests such fun events to go every year. It is something new every time!.

With so much fun, energy, good atmosphere and people from all over the world it gets clear fingerboarding is more than just a child’s room play – it’s also a team sport! 99% of all fingerboarders love these events and this is where we see one of our main duties. No one can go to all the contests, sessions and meetups so we will at least make sure to report from the major ones so you will not miss too much.

Results: A list with 136 names is something we do not want to bother you with here. Numbers and rankings are not that important. Everyone who visited this year’s world cup is automatically a winner.

This years big contest grew with up to 40-50% compared to last year. it is a little frightening to think of next years FastFingers 13 if fingerboarding will continue to grow with this speed. Soon our sport will fill huge stadiums designed for football and baseball. Yeah right!!

Fingerboard Worldchampionship Fast Fingers in Schwarzenbach an der Saale (Germany) Big thanks to Blackriver for this amazing event!