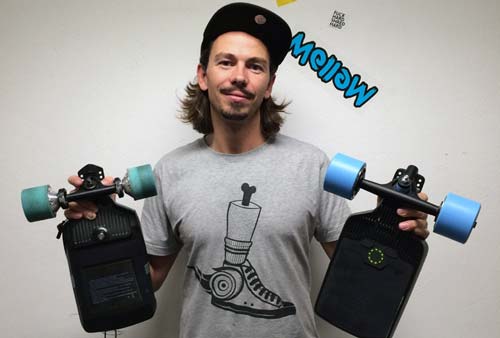 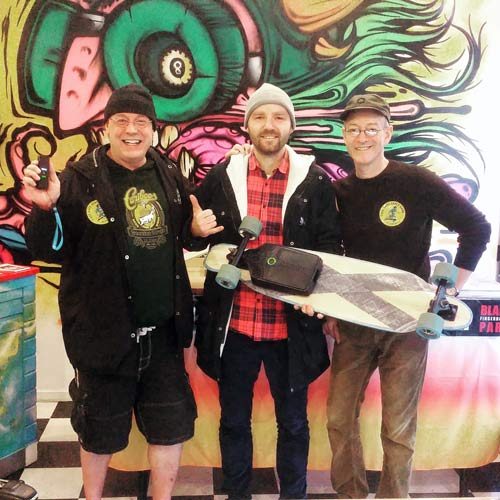 Before you spend your money on a highly technical piece of equipment, it’s important to make sure everything works well. With close to six years in development, the Mellow Board is a new concept in the electric skateboard market. The actual company was founded in 2015 by Johannes Schewe and Kilian Green. In June of that year, the company went on Kickstarter and met with a great deal of success.

“We received 310% of funding and in December we celebrated with a design release party in Hamburg,” Green says.

I met the Mellow team in late January 2016 at the ISPO show in Munich and was impressed with their unique product, the Mellow Drive. Just a few months later, however, I was shocked to discover that another company was offering a virtually identical copy of the Mellow Drive online, and at a considerable discount. Luckily, one or more persons who supported Mellow Board’s initial Kickstarter campaign also saw the copied design offered at a trade show and alerted the company.

“As you can imagine, we were shocked out of our minds,” says Green .

“This was just ridiculous! No one on the team could understand how anyone could copy this shamelessly. We had put so much love and effort into making the Mellow Drive what it is today, and now someone just stole it – and didn’t even do a good job at it.”

From the outside, the two products look quite identical. It’s only when you look under the hood that you begin to understand what is really taking place. Mellow has done just that, Green says. They’ve gotten their hands on one of the copycats and put it through its paces in their testing lab, where Green says they can measure speed, torque, currents, voltages, temperatures and efficiencies on test rigs built up exactly like those used in the automotive industry for development and analysis.

“On the first look it became shockingly clear how bad the quality of the knockoff product was and how dangerous the whole setup could be,” Green says.

“From the connectors inside the system to the RF-module and all the way to the remote control, the components were all premade for other products – mainly RF models and toys. They were obviously not made for skating and the heavy duty requirements that skating brings. Electronics are deceiving because most of the people do not understand them too well.” 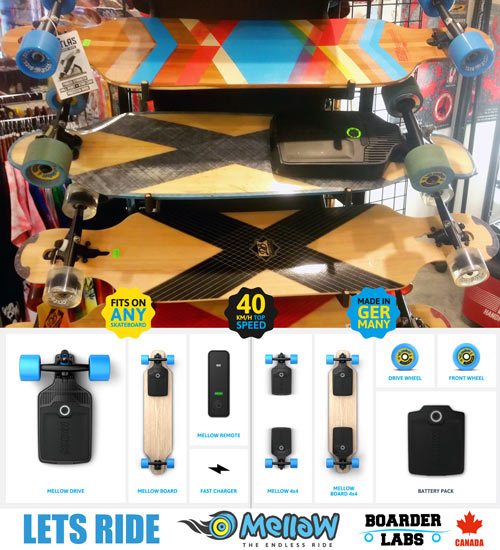 Luckily, while developing their products, the Mellow team did their homework on getting design protection for Europe. They have since extended that protection by obtaining a worldwide design patent.

“With this in mind we could stop worrying too much about the copycat, since anyone selling the product will be violating our patents and therefore will be getting love letters from us rather sooner than later,” Green says with a grin.

Mellow’s extended patents mean Mellow can even demand that copycat products be confiscated and destroyed when found in customs. However, such enforcement efforts are not foolproof, and Green says he’s concerned about the possible effects if any knockoff products slip through and are sold – especially if the cheap copycats start blowing up like some self alancing “hoverboard” scooters did last winter. Such incidents might seriously damage the reputation of the entire electric skateboard industry.

“There will be people who would doubt about our integrity and the realness of the data presented, and this is understandable; we are also a manufacturer,” Green says.

But Green says the biggest reason Mellow is coming forward with their test data is to protect customers from getting hurt and wasting their money.

“This is our contribution to the community of board sports,” he says, “and we see it also as our duty since no one else seems to have the means of doing this.” In our next column, we’ll take you under the hood to see just how dangerous this knockoff is. – Ed.

Thanks to Michael Brooke of Concrete Wave Magazine!