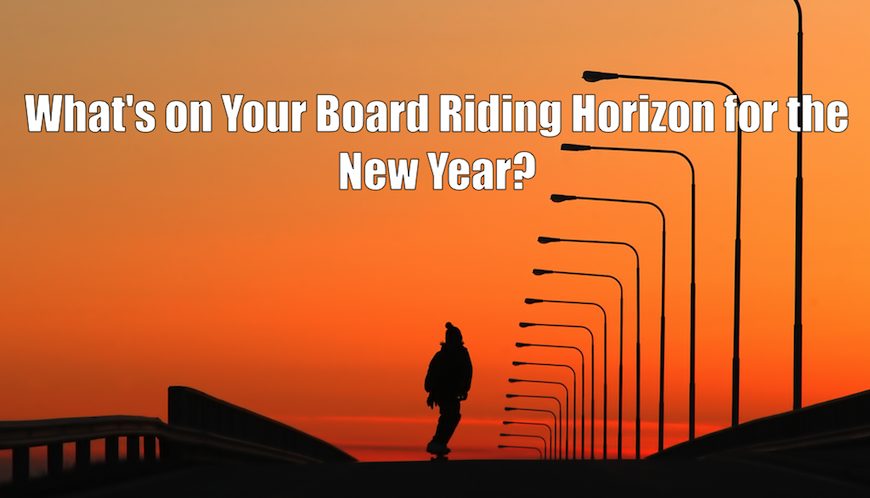 Here we are in the first week of 2018 and like most people, you’re ripe and ready to hit (and stick to) those new year resolutions. But also like many of us, those resolutions will be sidelined somewhere in February as life’s distractions get in the way. That happens because most pledges to be better kind of suck.

Cutting back on carbs, going to the gym more, and putting an end to your social media addiction can be great personal causes, but they aren’t all that fun to maintain. In order to keep from falling off the resolution wagon, you need to come up with a few goals that are unique to you – a core skateboarder. And as the go-to skate shop in Vancouver (brick and mortar) and Canada (online) we’re here to set the table with a slate of new year resolutions you’ll actually enjoy going for.

One popular resolution for many is to try something new, as often as possible. This is a good one for skaters, as we tend to get caught up riding the same ol’ boards year in and out. If it ain’t broke, don’t fix it, right? Wrong.

BoarderLabs/CalStreets has been in business for a long time we’ve seen the resistance to new ways of riding. We’ve also seen minds change overnight after trying a completely different board that one is accustomed too.

However, there is no better example of the call to try something new than found with the arrival of the electric skateboard. Traditionalists and luddites alike balked at the idea, but one step onto an Evolve, Boosted, Inboard, and Mellow Electric driven deck and you’ll find out what the fuss is all about. If cost-for-performance was keeping your e-skate curiosity at bay, you’ll be happy to know that the new Lectric Skateboard delivers high-performance with a highly affordable price tag.

There is now nothing to stop you from trying something new, but you, so let 2018 be the year you open up your world of possibilities.

You can’t know where you’re going until you know where you’ve been. For a skater that has been around the block a few times, the cliche rings true. So in the new year, celebrate the truism by picking up and riding one of these vintage skateboard reissues which will reignite your passion for boarding riding.

And for you young bucks looking for a sweet taste of how it all began, but don’t know where to begin, you can’t go wrong with one of these featured reissue decks.

The definition of insanity is doing the same thing over and over again and expecting a different result. Therefore if you want to become a better and more well-rounded skateboarder, you will want to ride a greater variety of boards. We touched on this in goal #1 above (trying something new) but it bears repeating for this resolution.

If you currently own a “standard” skateboard, add a longboard to your quiver (or vice versa). If you already own both, try an electric skateboard and find out how it will forever change the way you look at riding greater distances, gradients, and otherwise impossible terrain. By riding a mixed bag, and often, you will complement the unique set of skills required of each and will become a better boarder because of it.

Unlike the current POTUS would have you think, diversity is the key to making something great again, skateboarding included.

4. Introduce Someone to Skateboarding

Becoming more social (outside of social media) is also on the list for some, but when your circle of friends, family, or loved ones doesn’t include many (or any) boarders it can be a tricky goal. The life can be a somewhat lonely existence when all you’ve got are part-time skatepark pals to fill that void.

Instead, introduce someone close to you to skateboarding. From sibling to spouse and classmate to coworker there is no one out of bounds. You just have to find an option that suits their own personal tastes. If you’re friend is a surfer, then get them into skateboarding with a Carver. If you’re a parent trying to light a spark (for skating) in your tot, distract them from their current lot of toys with a fingerboard (and accessories) until they are ready for their first Penny. And if you’re a guy whose wife or girlfriend mistakenly thinks that skateboarding is a boys club, they’ll find that they couldn’t be more wrong and may very well end up ripping passed you on their own Meow board. You get the idea.

There is an inner skateboarder within your circle, waiting for you to bring it out in the them. Bring them down to BoarderLabs and we’ll help you do so.

Here’s to a Ripping and Riding New Year in 2018