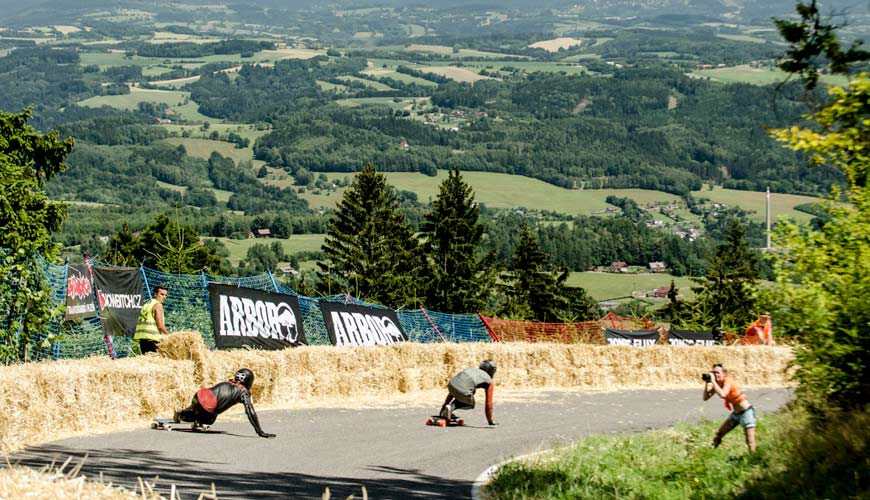 THE SEVEN-YEAR PITCH
KOZAKOV CHALLENGE LIVES UP TO ITS REPUTATION

Just over 100 kilometers northeast of Prague, the “thousand-spired” capital of the Czech Republic, a 4- to 6-million-year-old volcano slumbers high above the pastoral Bohemian landscape. While not the grandest peak in the region, for speedboarders worldwide this place is as epic as they come. With its three hairpins and steep straightaways on a smooth but narrow asphalt road to its 24-hour party, rowdy fans and drastic weather changes, Kozakov challenges the very best boarders.

This eruptive track is 3 km long and starts at a shady length at the hill’s peak. It drops quickly and opens onto a clear-cut slope, where scorching sun or pelting rain can blast riders as they sail into the first switchback. Riders then find themselves on a straightaway, entering a forest with a thick canopy where light and darkness dance chaotically upon visors. Two sharp hairpins quickly reveal themselves, while the crowded conifers hide the dangers of jagged rocks and deep streambeds. The trees begin to open up, revealing flashes of the panorama below. Coming out of the forest, the road straightens, and speeds often reach over 100 kph. Like pyroclastic flow from this once-active volcano, speedboarders fire into the unsuspecting farmland below, crossing the long, flat finishing stretch and leaving lava-like ’thane and rubber behind.

2015 marked the Kozakov Challenge’s seventh year, and it’s come a long way since its first year in 2009, with some well-received added features. These included a small but aggressive mini ramp next to the hilltop campsite, which kept the nervous legs of both fans and competitors satisfied, if not bloody and bruised, throughout the day and into the twilight. Even Heiko Schöller, the founder of Cologne’s Concrete Wave skate shop, could be found slapping smiths along the coping. A few meters away, visitors could also test their balance, or lack thereof, on the two newly introduced slacklines. Thursday night saw the premiere of Longboard Girls Crew’s skate doc, OPEN, drawing fans in from the dark into the large party tent that has been a staple at Kozakov for many years.

The Kozakov Challenge has always stood apart from other races due to how   it has successfully integrated the pros, amateurs and fans. This fact is not lost on top rider James Kelly, who’s raced at Kozakov five times. “It’s great how 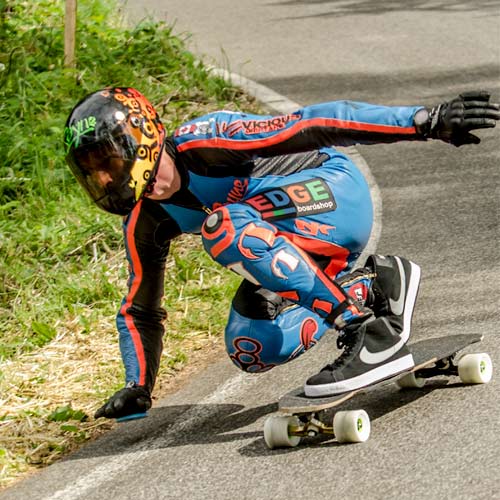 accessible the course is for spectators, especially at some of trickiest hairpins,” Kelly says. “It’s a tight-knit event, with the campsite and parking at the top of the hill as well as the ceremony tent, ensuring riders and fans stay together – unlike other events where most riders leave for their hotel by car after the race day.”

Despite its current status, Kozakov’s origins are humble. Founder and current chairman of the Czech Gravity Sports Association, Jan Profous, a longtime classic luge enthusiast, was inspired while visiting an International Gravity Sports Association race in Almabtrieb, Germany, in 2008. “The people were so nice, and the event didn’t look so difficult to organize,” he says. “I was determined to host a similar race in Czechia to show them our hills but soon found out how difficult it was.”

For years Profous and some friends had been scouting for the perfect road to hold such a competition. When one of the first local experienced riders, Stephan Risch, invited them to a backwoods village in North Bohemia and introduced them to the now infamous 2921 route running up and over Kozakov, they knew they’d found it. They sent a video of the track to IGSA President Marcus Rietema, who subsequently granted them a license for the European Championships. A year later CGSA was born. Then came the arduous task of getting permission from the local government to use the hill. It was, and continues to be, a long and difficult procedure for CGSA. “Nerves of steel were needed,” Profous says, “but the powers that be in this region were surprisingly more cooperative than expected, and they helped move the process along.”

After half a year of sleepless nights, the summer of 2009 saw the first Kozakov Challenge. Profous says he clearly remembers when the first rider was on the road. He had been up all night with his scratchpad, nervously reviewing all the notes he had taken since January. He says he remembers thinking, “Who would have thought from just three individuals first exploring the hill, that we would have 120 international riders ready at the starting mark?”

In fact, 160 riders had registered, which was a grand moment for CGSA. However, 40 of those riders didn’t show up, which nearly bankrupted the organization. But in an act straight out of a feel-good Hollywood film, the riders got together and created a charity on site. “Alex Luxat even sold his leathers and board to donate cash to the cause,” Profous says. “All this unbelievable generosity helped us survive the year. … Without their help, there wouldn’t be any further Kozakovs.”

The following year, Kozakov Challenge was named the IGSA World Championships, and the number of racers continued to increase. The 2015 race hosted 220 riders and almost 10,000 spectators. Yet despite this growth, CGSA still ensures that all riders get in at least 10 freerides and that fans have access to key viewing spots. 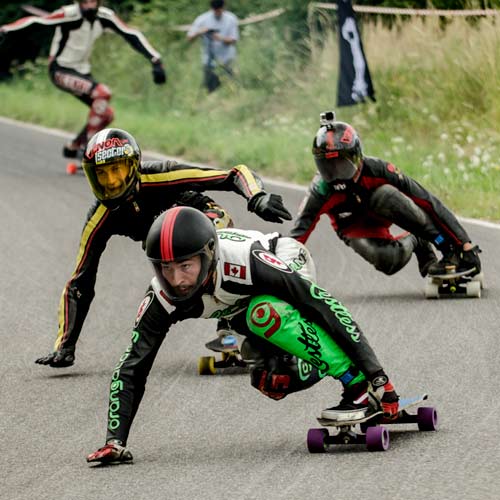 In the early years the atmosphere of the event was a bit different from the grand reputation it now holds as a top race in the International Downhill Federation (which took over the race’s sanctioning from the IGSA in 2013). “Everyone was goofing around and having so much fun,” reminisces seven-year Kozakov veteran Patrick Switzer. “We didn’t necessarily show off any crazy skills on the track; we just had a ridiculously good time.” This year, Switzer could be seen doing giant stinkbug slides around the tightest turns and tucking into incredible speeds on the straights.

Early on, Kozakov was also more of a European event. “In 2010, my first year,” says Marie Bougourd, currently the IDF’s No. 2-ranked female rider and a previous winner at Kozakov, “a lot of French people attended, and we only kept to our little group on and off the track.” Now you’re more likely to find Bougourd strategizing with her American boyfriend and top 10 contender, Kyle Wester.

In fact, if you look at KC’s registration, it reads like a list of U.N. diplomats, with countries from every continent represented. The road was repaved shortly before the very first competition and has remained in good condition – mostly. As No. 1-ranked and current IDF World Champion Kevin Reimer points out, “It has changed over the years, and the pavement has progressed in a poor way, with tar patches at the top and oil stains along the way; but, unfortunately, not much can be done with this.” Regardless, the road still continues to impress riders. “It feels like the track was purposely built for downhill skateboarding,” Wester says. “The width is perfect. It’s fast and very technical.”

These aspects haven’t been lost on other riders. “In the 2011 finals,” Kelly says, “I was speeding into that first right and I crashed and I high-sided. I remember flying backwards – it was one of the scariest moments I’ve ever experienced – going 80 K. Luckily, I backflipped and landed sitting against the hay barriers.” After taking off his helmet he realized he was OK – a bit shaken, but ready to race another day. In 2015, Justin Rouleau, who was skating with a broken kneecap, found the track’s intensity too much. His knee gave out and he slammed hard; both he and his helmet were cracked, and he had to pull out of the race.

Not all of the stories are so dramatic. Reimer and others follow the Czech national pastime of foraging, picking forest berries in the thick woods covering the hill between races. “We dubbed it ‘berry farming’ and we were laughing the whole time – a great way to unwind after intense racing,” he says with a smile.

Tales from Kozakov’s evening parties could fill books – not the type you would read to a child. While celebrations are to be had every night, the one after Saturday’s award ceremony is explosive. DJs mix into the early hours of Sunday while participants dance, drink to excess and partake in the nihilistic tradition of stacking the portable benches, up to eight high, and surfing them until they collapse in a loud thunder of metal and wood, and sometimes blood and flesh.

music, sometimes irritating the fans and riders. “While I love almost everything here, it gets really sketchy at the party,” says Canadian racer Emily Pross. “I would be nowhere near here tonight if it wasn’t for the ceremony.” The majority, however, seem to ignore the yokels and celebrate with gusto with friends old and new.

In 2015, the Czech Republic experienced its hottest summer on record. This brought swarms of angry wasps that were literally crawling out of the ground and buzzing anything and everything. Many a scream could be heard as stingers met skin. Throughout the week, riders were bombarded with intense heat and summer storms. It was wise to keep the rain wheels close at hand.

The forecast on the final day promised a storm, although the clouds looked light and high. Much to the chagrin of the riders, the organizers decided to shorten the track, similar to 2012. Although not a drop of rain had fallen, both the starting and finishing line were drawn closer. Frustrated riders could be heard complaining about the lack of speed and about losing important turns. Then just minutes before the semifinals, the sky darkened, the wind strengthened and the heavens opened up. Rain and wind blew so intensely that up at the campsite, marquees and tents were being tossed around in the air and frantic fans ran for shelter under the more stable ceremonial tent. On the track, it took several people just to hold down the starting-line shelter and keep the race going.

The riders quickly switched to their rain setups and rallied for a wet ride. “Despite the rain, there were the most spectators I’ve ever seen!” noted Kozakov newcomer Loryn Roberson. After the 20-minute tempest, the racers pushed off and braved the new conditions into the finals. In the end, first-time attendee Pross beat out veteran Bougourd and Lyde Begue to win the women’s division. “I was so pissed when they shortened this amazing track while it was dry,” Pross says, “but it was totally worth it, since after the storm my foot was on the road more than on the board, footbraking.”

Surprisingly, many of the favorites in the open class were knocked out early, including Reimer, Switzer, Australia’s Connor Ferguson and Germany’s Seb Hertler. Only Brazil’s Carlos Paixão was a repeat finalist, coming in third. Americans and Kozakov first-timers Jimmy Riha and Byron Essert upset the ranking by taking first and second, respectively.

With several of last year’s juniors moving up to Open this year, it was anyone’s guess who would take the junior division. It turned out to be Canada’s Alex Charleson, who finished before Norway’s Jørund Bratset and Czech racer Vašek Cvancara. As the only Czech on the podium, Cvancara brought about the wildest cheers during the awards ceremony.

After all the formalities, it was time for the fiery party to begin and continue ’til the crack of dawn. Another successful Kozakov Challenge had passed, and the minions of downhill eagerly began to await the next. 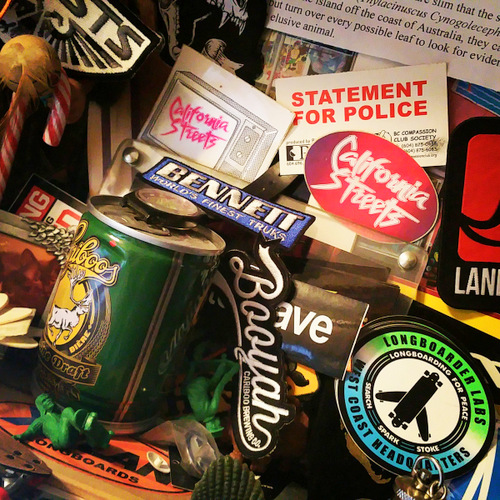