People skateboard for many different reasons. Some enjoy the freedom and some enjoy the exercise – both physical and mental. But for more than 50 years, skaters have challenged the idea that you could only push with your own power. Gasoline-powered skateboards were available as far back as 1965, and back in the 1970s, Canadian skate legend Willi Winkels would bring out his gas-powered Motoboard and drive crowds wild. Unfortunately, due to its extremely loud noise and pollution, the Motoboard was eventually banned in California.

Electric skateboards were a later development. The first ones started to make their way onto trade-show floors and under skaters’ feet sometime around 1997. We can thank a man named Louis J. Finkle for his pioneering work to make that happen. “Electric Louie’s” boards definitely had speed, but they were bulky (some weighed more than 80 pounds) and expensive (when adjusted for inflation, about $2,000). A company called Altered Skates took over from Louie and managed to move things forward. They cut the weight to 42 pounds and achieved quite a bit of success. (Longtime readers may remember that Altered advertised in Concrete Wave back in the mid-2000s.) 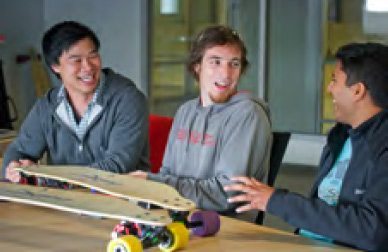 skateboards to a whole new level. Breakthroughs in battery technology have reduced board weights dramatically, with many setups weighing 15 pounds or less, and sophisticated software and motor controllers allow riders to customize the boards’ power, speed and range.

Legal barriers are falling, too. On Oct. 11, 2015, Governor Jerry Brown of California signed a bill that made electric skateboards legal – a boon to electric enthusiasts.

As retailers across North America report brisk sales, we wanted to give our readers a little more insight to this world.
While we profess a devotion to pushing, riding an electric skateboard can also be quite a joyful experience. Their speed, portability and quasi-hoverboard sensation make for a pretty cool ride. As people look for ways to deal with the madness of traffic congestion, electric skateboards offer a truly alternative means of transportation. Remember this statistic: 50% of all car trips in the USA are less than five miles. Why drive when you can glide?

Based in Mountain View, California, Boosted Boards entered the market in 2012 with a lightweight, extremely sleek design. Their unique approach earned them almost $500,000 on Kickstarter along with a TED Talk. I met up with Matthew Tran, one of Boosted’s three co-founders, at last September’s Surf Expo to find out more about the company.

All three co-founders attended grad school in engineering at Stanford, and they all sometimes skipped class for an epic powder day on the slopes. “We are engineers by background, with a passion for all things fast, and a little on the edge,” Matthew said. “It makes sense that we would work on a fast, fun electric vehicle to bring the feeling of the slopes back to our daily commute.

“I would describe myself as a daydreamer with sketchbooks full of hoverboards and airplanes,” he added. “When I heard that a Segway felt like a flying carpet, I knew I had to recreate this sensation on a board.” John Ulmen built the first Boosted prototype to speed up his trips around campus. Matt described John as one of those brilliant scientists who had to be carefully watched as a child: “You know, the kind that turns the family Christmas tree into a rocket and launches it.”

Matt called Boosted’s third co-founder, Sanjay Dastoor, a curator of technology. “He can talk for hours about the advantages of air-cooled Porsches or the virtues of the original Sony Walkman,” he added. Sanjay is gregarious by nature, Matt said, so he knows a lot of people, and he was the one who connected John and Matt. 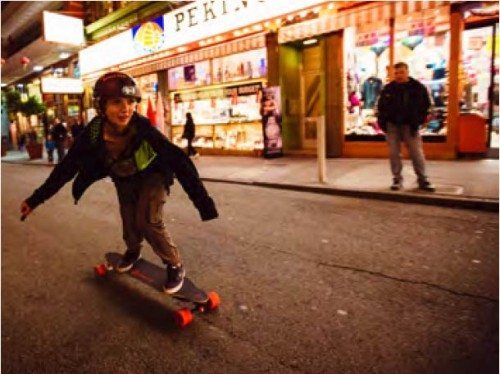 The team used John’s prototype as the basis to launch Boosted. They went through many iterations of intense testing and direct user feedback, relying on what Matt called “irrational optimism” that they were on the right track. “Otherwise, we would have never left our day jobs,” he said. “When people started running after us to ask where they could buy a prototype and grown men giggled after riding it, we knew we were on to something big.” Others have also contributed to the company’s growth. Mark Frykman was Boosted’s first intern. “He’s a surfer at heart and lives in the machine shop when he’s not in the waves,” Matt said, “so he was a natural to be in charge of our mechanical design.”

George Schnakenberg grew up skateboarding and now commutes around San Francisco on electric bikes he designed and built. “As our industrial designer, George did an amazing job of making the Boosted board tough and beautiful,” Matt said.

Electrical engineer Jean-Francois Duval helped Boosted design their circuit boards. For personal and professional reasons, he left for MIT, so Jessica Riley later joined Boosted as the electrical engineer. “She is not only a great engineer but has also helped to organize the increasingly complex design” Matt said.

The final person on the original Boosted team was Sal Trujillo. “He’s an extremely diligent designer,” Matt said, “a brilliant software engineer who made the board feel so natural and intuitive.”

Boosted currently offers three models. They vary in price from about $1,000 to $1,500 Depending on the model, speeds can range from 18 to 22 mph. Look for a demo clinic coming to a city near you.

Based in Santa Cruz, Inboard has developed an electric skateboard that definitely looks and feels like a regular longboard. Its beautifully stealth design also incorporates what Inboard calls “Manta Drive,” an in-wheel, directdrive motor assembly.

Product designer Paige Doolin said Inboard knew that if they wanted to make the M1 model stand out from other electric skateboards, they had to do their best to conceal all the electronics. “One of our primary goals with the M1 was to create an electric skateboard that stayed true to its non-electric counterparts, not only in terms of appearance, but performance as well,” she said.

The Manta Drive embeds the motor inside the wheels, eliminating the need to mount an external motor to the deck. “This was a huge step forward for the look of the M1,” Paige said, “while at the same time allowing us to realize our goal of a reduced-friction drivetrain, so the rider can manually push the board without resistance.” From there the team began to figure out ways to integrate the motor controllers, Power Shift Battery and LEDs directly into the board. The result is a truly sleek design.

The company went through at least five different iterations on the deck. “With each new design,” Paige said, “we were making changes for battery depth, electronics placement and the potential for wheelbite.”

Another critical goal in the design process was transitioning curves and surfaces between the deck’s nose, midsection and tail. “We had to leave enough depth for the battery and other internal components, but wanted to keep the rails and belly slim to give the board a very sleek and lightweight appearance,” said Nate Appel, Inboard’s head of marketing.

The Inboard team spent a great deal of time on computers, working on different models, trying to dial in the correct look, but they also simply rode the prototypes. “We found that getting out and riding the decks answered a lot of questions that couldn’t be determined from the computer,” Nate said. The combined design and testing allowed for educated adjustments that improved the blending of all the deck surfaces.

Inboard’s M1 model has a top speed of 24 mph and can go up to 10 miles on a charge. However, the batteries are swappable, which means you won’t have to wait to recharge – as long as you remember to bring them!

EVOLVE
Based in Australia, Evolve has spent more than

five years in research and development. The boards feature regenerative braking and fast recharge and come in two distinct series: bamboo and carbon. Top speed is 24 mph. The bamboo model has a range of 19 miles, while the carbon model can hit 25 miles. Weight on the bamboo series is 17 lbs., and the carbon series adds an additional pound.

Coming in at just 10 lbs., the Marbel electric skateboard has a range of up to 16 miles and can hit up to 25 mph. The sleek carbon fiber composite deck adds to its overall appeal. Marbel has also created a smartphone app that customizes the ride experience.

over $330,000 on Kickstarter by offering a very different take on mobility: the first mountable drive that turns any normal skateboard into an electric skateboard. The Mellow Drive has a top speed of 24 miles per hour and a range of 9 miles.

METROBOARD
Thirteen years ago, Metroboard founder Ilan Sabar was fascinated by an electric board he

spotted. He believed he could improve upon the design, so he started tinkering with ideas. By 2007 the first Metroboard was sold. Metroboard’s current lineup features 3000-watt (peak) motors, a slim battery pack that provides up to a 40-mile range and a wireless infrared remote that is immune to RF interference like Bluetooth and power lines. The boards also feature lights at both the tail and nose.

Hailing from Slovenia, Next Generation Vehicles (NGV) was established with the idea of developing new-generation vehicles with electric drive. NGV is focusing on one key thing: speed! In late October 2015, Mischo Erban rode an NGV board to a world speed record, averaging just under 60 mph – on flat ground! The company plans to have commercial boards available for sale this spring.

Taking a completely different approach, ZBoard built the world’s first weight-sensing electric skateboard: You simply lean forward to go and lean back to stop. The integrated weight-sensing footpads and electric motor allow you to control acceleration up to a top speed of 20 mph. The 2 Blue model (16 lbs.) has a range of 16 miles, while the 2 Pearl (18 lbs.) can go up to 24 miles. Both models feature unique LED lights on the nose and tail.

Huge Thanks to Michael Brooke and Concrete Wage Magazine for the Article.