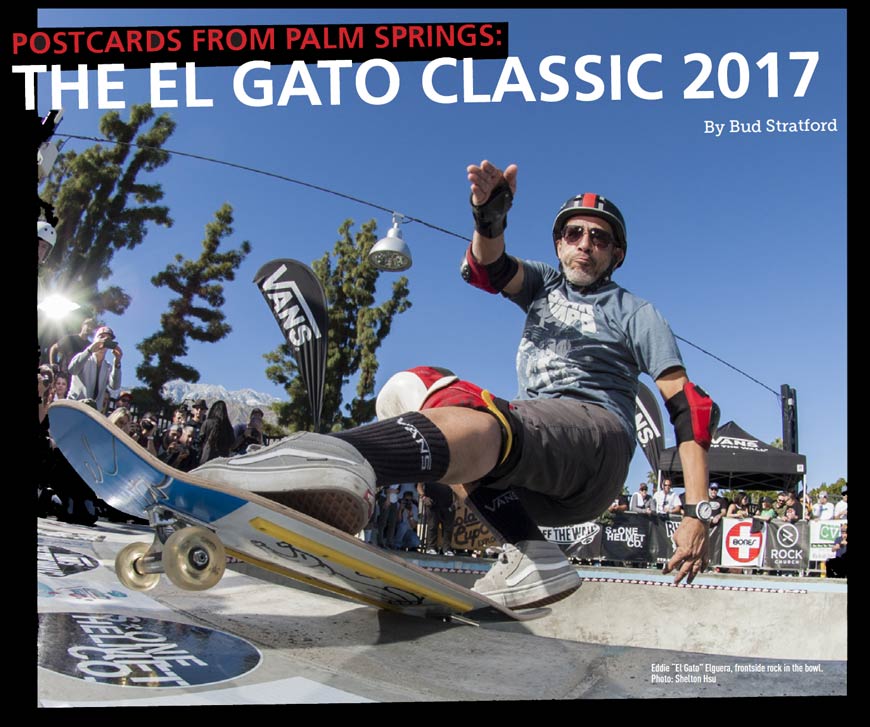 THE EL GATO CLASSIC 2017: It’s only been a week since I assumed my new title at the mag, and already it’s been quite a trip. One of my first tasks was to see what was in the pipeline for the upcoming issues. Realizing that there was no El Gato Classic coverage planned – a mortal sin, right there – I volunteered to go, provided the publisher could get me press credentials. Five hours later, they materialized in my mailbox. I was genuinely impressed. Somewhere along the line, I casually asked if we could get Jim Goodrich (the famous skate photographer) to shoot photos. I was totally chewing ’shrooms when I thought that one up, just being a prankster; I never really thought it could happen. But apparently, it’s actually a possibility. Well, I’ll be schnookered. Life only gets weirder from here.

Just got a confirmation text from Goodrich; he humbly accepted the assignment, so we’re covering the contest together. Jim Goodrich. And me. I am so totally bowled over right now, it’s completely ridiculous. I never thought in a zillion years that I’d be covering a contest with a living legend like Jim Goodrich. Heck, I’d never even considered dreaming it up until about five hours ago. I haven’t even left for Palm Springs yet. But at the same time, I feel like I’ve already arrived.

I decided to take the micro-camper for this trip, because having a plush, queen-size Sealy Posturepedic with you everywhere you go is the ultimate in aging-skater conveniences. I left Phoenix at 7:30 p.m., rolled into Palm Springs around 1:00 a.m., and besides nearly running out of gas at Chiriaco Summit (because daydreamer over here wasn’t exactly paying attention), it all went pretty smoothly. I found the skatepark straightaway, turned in for the night in the parking lot … and got booted by security within five minutes, just as I got all tucked in, cozy and warm. The strip mall around the corner proved far more hospitable, but the donut smells emanating from the nearby bakery are making my fat ol’ belly rumble. Win some, lose some, it’s all the same to me. The pleasure, my frenemies, is to play. Name that song, and score some cool points along the way. Eddie Elguera, frontside invert on the Boom Boom ramp. Photo: Shelton Hsu

Everybody seems to be here. When I say “everybody,” I mean literally everybody. Every living legend that skateboarding has ever produced seems to be on hand and accounted for. Gregg eaver, aka the Cadillac Kid, is here; that bit seems to be the big surprise of the weekend for most of this crowd. Goodrich is fanning out and catching up with everybody; considering the source, that’s quite a statement. It’s pretty exciting to be the fly on the wall for these conversations. I’m learning a heap-ton about skateboarding’s past here today, from the mouths and the minds that were there, making it all happen. Tony Hawk through the fence, one-footed invert. Photo: Shelton Hsu

The “Expression Session” is going off in the bowl. Deck space is at a premium, so I’m lying down super close to the action as I click away with my trusty camera. Dennis Martinez is on the mic, introducing everybody to the crowd. Hackett is busting signature slashes everywhere. Dressen is skating at his typically aggressive velocity. Stevie Cab and Eddie Elguera have their smooth, signature styles. Bowman, Pineapple and Elguera are doing triples in the bowl (not sure how, because that bowl is tight). Gonz is running through the bowl chasing Salba. Bucky Lasek has swung by to check out the action and seems to really be enjoying it. Jami Godfrey flew in from Jersey to bust out a few full-throttle laybacks. Olson is winning, just by being Olson. Ted Nugent’s “Stranglehold” is blaring over the speakers in between Ramones singles. If all this sounds like a total f’n blast, well, that’s probably because it is. Jim Goodrich (left) and Kevin Staab. Photo: Bud Stratford

Elguera just did a pivot to fakie in the deepest part of the bowl. Eddie’s like, 54 years old or something. He’s not supposed to be doing that sort of shit. But he did it. I yelled at the top of my lungs, “Fuuuuuuuuuuuu!” and then I realized, much to my horror, that I was the only dude yelling. I looked over at “Professor” Paul Schmitt a little self-consciously, and silently asked him why I’m the only doofus over here screaming my lungs out. Maybe Eddie does this sort of crazy stuff all the time; I don’t know. Still seemed pretty yell-worthy to me. Maybe I’m a bigger idiot than I thought. Gavin Bottger, the Prodigy. Melon fakie? Stalefish? Pop tart? You name it, he can probably do it. Photo: Shelton Hsu

The vert contest practice has started. Gavin Bottger is on the ramp, killing every trick ever invented. This kid truly rips, and he’s only 10. I’m shocked and completely baffled, because once again, it’s total crickets from the crowd. If I turned around and looked the other way, I wouldn’t even know there was an event going on. But I have to give Gavin props. He’s probably on YouTube somewhere. (Everybody is these days, aren’t they?) Check him out if you haven’t yet. This kid’s the future, and the future looks pretty boss.. Jimmy Wilkins with a whole lotta frontside air. Photo: Shelton Hsu

The heavies on the ramp today seem to be Tony Hawk (as you might expect), Bucky Lasek (ditto), Jimmy Wilkins, Trey Wood and Mitchie Brusco. Jimmy just did a backside ollie backside body varial. Man, that looked tough. Glad it’s not me up there. This competition is super serious, and these guys are gunning for it. The format for the vert contest was a bit novel. The competitors drew names out of a hat and were put into teams, each consisting of one kid, one girl – yes, there are several girls here, ripping the ramp apart – a pro and a legend. Going into the finals, it was a three-way tie between Team Staab, Team Hosoi and Team Hawk. So it was all on the legends to determine the winning team. Well, that presented a foregone conclusion for almost everybody; there’s usually no stopping Tony Hawk in a vert contest, and today was no different. Tony did, however, have a really pleasing mix of tricks in his runs, ranging from his usual technical wizardry to some classic inverts and airs. Christian Hosoi still knows how to work a crowd, though! He probably won the crowd-appeal contest. And I could have sworn I spotted Steve Caballero busting a kickflip mute, completely out of nowhere. I didn’t imagine it. At least I don’t think I did.

I’m at the Hard Rock Hotel, checking out the menu before I order dinner. Christian Hosoi, his wife and their two kids are at the very next table over, directly in my line of sight. They’re discussing the high points of the day. The kids are animatedly excited, as kids often are after high-octane happenings. Christian is one of the guys that my generation grew up idolizing from afar, through the pages of magazines and reels of VHS videotapes. Now I’m lucky enough to be quietly observing him as an adult, in the flesh, watching him excel in his role as a loving family man. As they reminisce over the highlights of their day, I realize that watching this interplay is one of the highlights of mine.

The Faction is up on stage, rocking away under the bright lights. Between songs, Steve challenges the crowd to stop filming every little damn thing with their cellphones, get aggro and do some slam dancing. At that moment, I started craning my head everywhere, looking for Bowman; I learned the fun way at last year’s SkaterCon that if anyone can instigate some shit, it’s Bowman. Moments later, Mr. Bowman materializes, running all over the pit and bouncing off of everyone. That much, I obviously expected. What I did not expect, however, was for Mr. Bowman to suddenly jump up on stage, flail off a monitor, and stage-dive into the crowd. “The crowd,” in the immediate sense, was me and me alone; everybody else was off whirling around in the background, doing exactly as Stevie had instructed. Thank God Bowman’s not very heavy; at least he’s an easy catch. Because the last guy I’d ever want to be is the guy that’s remembered for dropping Brad Bowman on his damn head at the show.

I’m not supposed to be up this early. But thankfully, I found a nice, quiet camping spot on the outskirts of the city last night that was blissfully devoid of security chaps and steady traffic. This morning, I stumbled out of bed to find myself at the foot of the snow-topped Mount San Jacinto. That, my frenemies, is a view that’s worth getting up early for.

I’m at The Rock Church, where Eddie Elguera’s the pastor. Most of the legends from last night made it to the services this morning. I spent most of the pre-service meet-and-greet with Jim Goodrich and Steve Cathey, trying to identify the subjects of Lance Mountain’s most recent paintings. The service itself largely consisted of an uplifting and inspiring back- nd-forth interview between Eddie and Lance, around the common theme of the importance of taking your individual talents and skills … gifts from God, those are … and putting them to work to make the world around you a better place for everyone – even if those gifts may seem, at first glance, to be trivial, outlandish, unusual or unorthodox. Being a crappy writer (and an even worse photographer), that hope-filled and uplifting message resonated pretty deeply with me.

I spent the little time I had left in sunny and posh Palm Springs doing what I do best: nerding out and exploring the environs. The world does not revolve around skateboarding and skateboarding alone; there is a lot of other fun to be had out there, and my job (as I see it) is to go out and have it. After church, I beelined it to the Palm Springs Air Museum, where I got to study historic aircraft up close and personal, while taking in stories from the entertaining staff of volunteer veterans. Later, I thought it’d be super fun to scare the willies out of myself by taking a quick jaunt up the Palm Springs Aerial Tramway. I’m mortified of heights, so the tramway was preposterously petrifying for me. The views from the revolving car, though, were totally worth dying for. Thankfully, I lived to tell y’all about it. It’s getting a bit late, though, and I am thoroughly exhausted. It’s probably high time for me to start making my way back home. See you out on the road somewhere. A special thanks to Michael Brooke at Concrete Wave Magazine

The “El Gato Classic” Legends Weekend is an annual event that takes place in Palm Springs, CA. This event features some of skateboards greatest innovators of early pool riding and skate park competition. The EGC Legends Weekend brings together art, music, food and skateboarding as a complete weekend experience that is enjoyed by fans, industry professionals and Skateboarding’s top pros and legends.